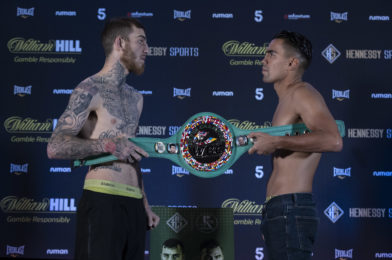 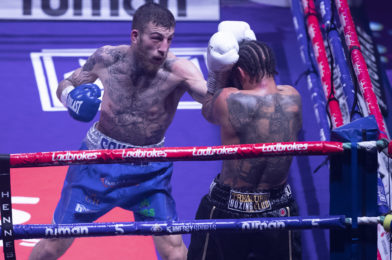 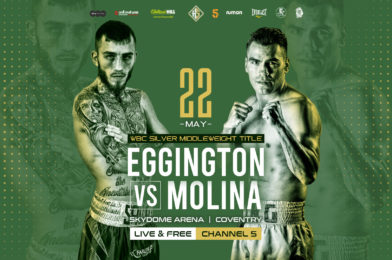 Former World Champion ‘King’ Carlos Molina has fired a warning to rival Sam Eggington that he’ll have to be at his best or he’ll be knocked out by the Mexican warrior in their Vacant WBC Silver Middleweight Championship clash on Saturday 22nd May at the Coventry Skydome Arena, live and free in the UK on Channel 5.

In an interview with Hennessy Sports’ YouTube channel, Molina said “I feel like I’m entering my prime.  I feel good physically, I can work out, I can run.  I feel like I’m smarter now as far as my training and that has benefited me a lot with my experience and I feel like that’s what I’m using more. I feel like they haven’t seen the best Carlos Molina yet, this fight is going to be the perfect fight for me to show the best King Carlos Molina that has ever fought.”

He continued, “I want to do this for my promotional company, also it’s a great opportunity to showcase my company in England in a big fight.  The reason why I started this promotional company was for my career to get a world title and that’s my goal.  I feel like I want to be the best, I want be the best at boxing and want to be the best at promoting, I want to be the best at everything that I do. And that’s how I’m coming into this fight, I’m coming in in excellent shape.  I’ve been busy, I’ve been training all the time, I love to train, I love to box, I love to run, I’m always in top shape. I’m looking forward to this fight because he (Sam) always comes in in shape and I feel it’s a great match up. I’m not thinking at this just as a fighter, but as a promoter also.  It’s a great match up and it’s so good that I wanted to get the best view in the ring.”

Knowing that a victory over Eggington and landing the WBC Silver crown could put him within touching distance of a World title shot, Molina is under no illusion and realises he will have to defeat Eggington and leave England with the belt.

He added, “I’m focused and I need to to win this fight, there’s no other way around it.  He’s going to see the best King Carlos Molina that has ever fought so I’m ready,”“I like it that he’s confident, I want my opponent confident so when they can’t hit you they can’t do what they want to do then that’s when they lose all that confidence.  I feel like I’m going to win this fight no matter what. I have to win this fight either by twelve round decision or late rounds stoppage.”

Also on the card Coventry sensation River Wilson-Bent (8-0-0, 4 KO’s) makes the first defence of his Midlands Area Middleweight title against Derby’s George Farrell (5-0-0, 1 KO).  Former British Light-Heavyweight Champion Shakan Pitters  (14-1-0, 4 KO’s) has his first back against Bradford’s Jermaine Springer (7-2-0, 1 KO)in an eight-rounder since losing his title to Craig Richards last December.  County Monaghan super-lightweight dynamo Stephen ‘The Hitman’ McKenna (7-0-0, 7 KO’s) features in a six-rounder, but the undefeated red-hot 24-year-old prospect has not needed to go the distance yet with all his fights ending inside.  Birmingham middleweight bombshell Idris ‘The Bodybreaker’ Virgo (9-0-1, 1 KO) goes in over six-rounds.  Sevenoaks all-action super-welterweight  Michael Hennessy Jr. (5-1-1) is in a six-rounder against Warminster’s Paul Cummings.  Irish super-welterweight ace Brett McGinty (1-0) follows up his thrilling pro debut last December when he features in a four-rounder against Birmingham’s Josh Hodgins.  Brighton heavyweight talent Tommy Welch (1-0-0, 1 KO), son of the former British, Commonwealth and World Heavyweight title challenger Scott, will follow up his explosive debut last December when he stopped Matt Gordon in the second round and features in a four-round contest.

Birmingham’s battle-hardened Sam Eggingtonwill face teak-tough Mexican warrior ‘King’ Carlos Molina  in a crucial showdown on Saturday 22 May at the Coventry Skydome Arena, with the Vacant WBC Silver Middleweight Championship on the line.

Presented by Hennessy Sports in association with William Hill, Infinitum, Numan, Everlast and King Carlos Promotions, Eggington v Molina will headline the exciting nine-fight card exclusively live and free-to-air across the UK and Ireland on Channel 5.

Eggington (29-7–0, 17 KO’s), a former British, Commonwealth and European Champion, is now within touching distance of a World title shot and fulfilling his destiny of finally becoming a World Champion.

Last in action in December behind-closed-doors, Eggington put on a devastating display of power-punching to destroy former British Champion and World title challenger Ashley Theophane inside six rounds and bring to a close the colourful veteran’s 50-fight career.

In a 36-fight and near nine year career, the working-class hero has fought everyone; usually away from home at short notice in fights he wasn’t supposed to win and on the end of wrong decisions, but all that suffer and heartache will change with a victory over Molina.

Now in his prime of his life, Eggington, 27, will take the risk against dangerman Molina as he’s aware of the bigger reward that will see him placed in a primary position to challenge for the World title next if he wins the WBC Silver crown.

The fight against Molina (37-11-2, 12 KO’s) is the type of war that ‘The Savage’ will relish against a vastly experienced former IBF World Super-Welterweight Champion who has faced a Who’s Who of champions, including Julio Cesar Chavez, Jr. (twice), Mike Alvarado, Erislandy Lara, Kermit Cintron, James Kirkland, Ishe Smith, Cory Spinks and Cornelius Bundrage.

In a near 20 year career with 50 fights and 401 rounds under his belt, Molina, 37, has never been stopped in his eleven losses.

His career highlight was defeating Ishe Smith to be crowned IBF World Champion in September 2013, but is also well known for highly controversial draws against Lara (March 2011) and Chavez, Jr. (December 2005), both fights that many felt Molina had won.

Even more controversial was the ending to his fight against Kirkland in March 2012 Molina completely dominated Kirkland up until the 11th round of the 12-rounder, but was disqualified at the end of the round when he was floored by Kirkland and while being counted by the referee, one of Molina’s cornermen entered the ring after the bell had rung to end the round.

Mexican born Molina holds no fear of coming to the UK to face Eggington having previously pushed Josh Kelly in their ten-round WBA International title fight in March 2018 in Cardiff.

In addition to fighting in the US, Molina has also fought in France and Santa Domingo, with his last fight overseas in Germany in February 2019.Since then Molina has kept very busy as he targets another World title fight.

Despite the pandemic and lack of fight opportunities, Molina returned to Mexico and creatively turned promoter and fought under his own banner, King Carlos Promotions.  He has put together an unbeaten eight-fight streak with his last fight in February registering a points win over Edgar Ortega.Well aware of the danger Molina poses, Eggington is already deep in training at his Eastside Boxing Gym HQ in Birmingham with coach Jon Pegg to see off Molina’s thunder.

Eggington, recently picked up the British Boxing Board of Control’s Contest of The Year Award 2019/2020 for his pulsating fight with rival Ted Cheeseman, said, “There’s nothing like a hard Mexican fighter to really get the blood and adrenaline pumping and I can’t wait for this one.  Molina is very experienced, he’s a former World Champion, he’s fought everyone and he’s still hungry and ambitious for another World title fight.  I like the danger that he brings to the ring which will bring the savage out in me.  I’m very close to my own World title fight and I can’t and won’t let Molina wreck that, so I’ll be going all out on him and if the knockout or stoppage comes and I’m the first man to do it to him, then that’s a bonus.”

Molina said, “My main goal when I started my promotional company was to make my own path to a world title. This is a great test for me and I’m looking forward to being the new WBC Silver Champion. It has come at a perfect time for me, having momentum coming off of eight consecutive wins and also to continue to build King Carlos Promotions by being associated as a promoter for this show.”

Promoter Mick Hennessy is excited to bring this show to Coventry as it begins its celebrations as the UK City of Culture 2021.  The event will also be a public attended event, open on a restricted basis in-line with the government’s roadmap – Step 3.

Tickets will go on sale shortly and will be available to purchase from  the Coventry Skydome Arena Box Office.  Hennessy Sports will release further information in due course.

Hennessy said, “Sam ended last year in explosive style when he dealt with the experienced Ashley Theophane very effectively and it was the perfect ending on his Channel 5 debut that greatly enhanced his profile.  Now he takes on another tough and difficult challenge against Molina that is really going to test him.  Molina has seen and done it all in his near two decades in the sport and been up against some of the best around the weight, but he is still very dangerous and he’ll have to be right on it with him.  Sam is so close to a world title now and this will open the door for him.”

The undercard will feature a cracking showdown between Birmingham’s Kaisee Benjamin (11-1-1, 2 KO’s) and Dumbarton’s Martin Harkin (13-1-0, 5 KO’s) in an Eliminator for the British Welterweight Championship (subject to BBBofC approval).   Coventry sensation River Wilson-Bent (8-0-0, 4 KO’s) makes the first defence of his Midlands Area Middleweight title against Derby’s George Farrell (5-0-0, 1 KO).  Bent won the title last December with a brutal right hand that flattened rival Troi Wilson in the third round in one of the KO’s of the year.

Former British Light-Heavyweight Champion Shakan Pitters  (14-1-0, 4 KO’s) has his first back against Bradford’s Jermaine Springer (7-2-0, 1 KO)in an eight-rounder since losing his title to Craig Richards last December and the Birmingham star is intent on reclaiming his Lonsdale belt.  County Monaghan super-lightweight dynamo Stephen ‘The Hitman’ McKenna (7-0-0, 7 KO’s) features in a six-rounder, but the undefeated red-hot 24-year-old prospect has not needed to go the distance yet with all his fights ending inside.

Birmingham middleweight bombshell Idris ‘The Bodybreaker’ Virgo (9-0-1, 1 KO) had a great 2021 with four wins on Hennessy Sports shows and now the entertainer continues on his path towards a first domestic title.

Sevenoaks all-action super-welterweight  Michael Hennessy Jr. (5-1-1) is in a six-rounder against Warminster’s Paul Cummings in his first fight of the year.  Hennessy ended 2021 with a complete shut-out of Dale Arrowsmith to win every round of their six-round contest.

Irish super-welterweight ace Brett McGinty (1-0) follows up his thrilling pro debut last December when he features in a four-rounder against Birmingham’s Josh Hodgins.

Brighton heavyweight talent Tommy Welch (1-0-0, 1 KO), son of the former British, Commonwealth and World Heavyweight title challenger Scott, will follow up his explosive debut last December when he stopped Matt Gordon in the second round and features in a four-round contest.

Hennessy added, “This is a fantastic fight card stacked from top to bottom with quality talent and fights.  I’m thrilled to have our young guns back out in action supporting Sam in the main event and the prospect of having fans back into the arena is very encouraging as we build towards a busy rest of the year with plenty of shows coming up.”