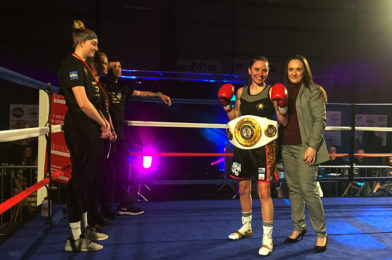 Former Amateur star Nicola Hopewell, who made her Professional Debut around two weeks before the global lockdown, against Ghanaian Amateur star Anita Addy, recently made a video diary covering one day of her adapted routine during this crisis.

Before we get to Nicola’s Video, here’s a little about her amateur career and accolades as well as the widely published report on her pro debut against Anita Addy.

Nicola, who was on the England Talent Pathway for twelve months, traveled to different gyms around the country, training with England coaches.

Whilst on the ETP system, she attended a three day Team GB training camp in Sheffield and sparred with the Italian boxing team.

Nicola has also shared the ring with the best in the country at her weight including Commonwealth gold medalist and now undefeated pro boxer Lisa Whiteside and GB boxer Tori Ellis Willetts who is on the pathway for the Olympics. Nicola has also sparred professional boxers Nicola Adams, Nina Bradley and Terri Harper.

Below is the widely published report on Nicola Hopewell’s Professional debut, that took place on the 7th March 2020 at the Hoops Basketball Centre in Barrow-in-Furness.

Both protagonists were cautious in their initial approach, both working hard behind their jab, testing the other’s mettle with crisp fast flurries. As the round progressed Addy began to load more power into her shots, which in turn led to Hopewell returning equally powerful shots and for the rest of the round the pair entertained the assembled crowd with some sensational boxing.

Hopewell comes out hard and fast in the second, soon backing Addy into a neutral corner before letting rip with both hands, Addy initially began to fight her way out from the corner but Hopewell had an answer for everything the Ghanaian threw at her and kept forcing her backed up against the ropes before letting rip with a peach of a head-shot to send Addy crashing to the canvas.

Hopewell’s power in that shot proved too much for the tough Ghanaian, who was unable to rise to her feet before Referee Lee Murtagh’s count reached its conclusion. Official time of stoppage just Twenty Seconds of the Second Round.