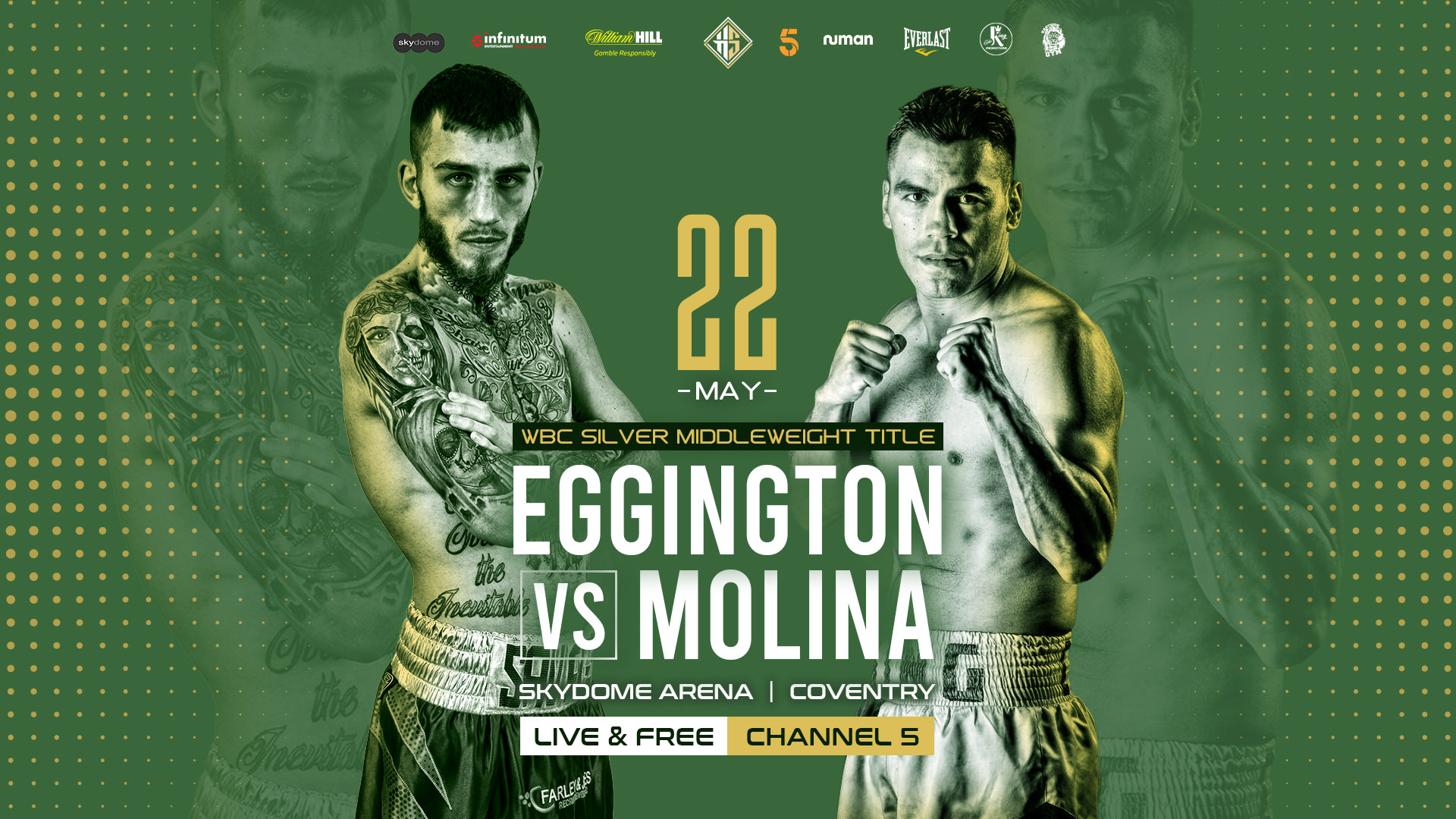 Former World Champion ‘King’ Carlos Molina has fired a warning to rival Sam Eggington that he’ll have to be at his best or he’ll be knocked out by the Mexican warrior in their Vacant WBC Silver Middleweight Championship clash on Saturday 22nd May at the Coventry Skydome Arena, live and free in the UK on Channel 5.

In an interview with Hennessy Sports’ YouTube channel, Molina said “I feel like I’m entering my prime.  I feel good physically, I can work out, I can run.  I feel like I’m smarter now as far as my training and that has benefited me a lot with my experience and I feel like that’s what I’m using more. I feel like they haven’t seen the best Carlos Molina yet, this fight is going to be the perfect fight for me to show the best King Carlos Molina that has ever fought.”

He continued, “I want to do this for my promotional company, also it’s a great opportunity to showcase my company in England in a big fight.  The reason why I started this promotional company was for my career to get a world title and that’s my goal.  I feel like I want to be the best, I want be the best at boxing and want to be the best at promoting, I want to be the best at everything that I do. And that’s how I’m coming into this fight, I’m coming in in excellent shape.  I’ve been busy, I’ve been training all the time, I love to train, I love to box, I love to run, I’m always in top shape. I’m looking forward to this fight because he (Sam) always comes in in shape and I feel it’s a great match up. I’m not thinking at this just as a fighter, but as a promoter also.  It’s a great match up and it’s so good that I wanted to get the best view in the ring.”

Knowing that a victory over Eggington and landing the WBC Silver crown could put him within touching distance of a World title shot, Molina is under no illusion and realises he will have to defeat Eggington and leave England with the belt.

He added, “I’m focused and I need to to win this fight, there’s no other way around it.  He’s going to see the best King Carlos Molina that has ever fought so I’m ready,”“I like it that he’s confident, I want my opponent confident so when they can’t hit you they can’t do what they want to do then that’s when they lose all that confidence.  I feel like I’m going to win this fight no matter what. I have to win this fight either by twelve round decision or late rounds stoppage.”

Also on the card Coventry sensation River Wilson-Bent (8-0-0, 4 KO’s) makes the first defence of his Midlands Area Middleweight title against Derby’s George Farrell (5-0-0, 1 KO).  Former British Light-Heavyweight Champion Shakan Pitters  (14-1-0, 4 KO’s) has his first back against Bradford’s Jermaine Springer (7-2-0, 1 KO)in an eight-rounder since losing his title to Craig Richards last December.  County Monaghan super-lightweight dynamo Stephen ‘The Hitman’ McKenna (7-0-0, 7 KO’s) features in a six-rounder, but the undefeated red-hot 24-year-old prospect has not needed to go the distance yet with all his fights ending inside.  Birmingham middleweight bombshell Idris ‘The Bodybreaker’ Virgo (9-0-1, 1 KO) goes in over six-rounds.  Sevenoaks all-action super-welterweight  Michael Hennessy Jr. (5-1-1) is in a six-rounder against Warminster’s Paul Cummings.  Irish super-welterweight ace Brett McGinty (1-0) follows up his thrilling pro debut last December when he features in a four-rounder against Birmingham’s Josh Hodgins.  Brighton heavyweight talent Tommy Welch (1-0-0, 1 KO), son of the former British, Commonwealth and World Heavyweight title challenger Scott, will follow up his explosive debut last December when he stopped Matt Gordon in the second round and features in a four-round contest.