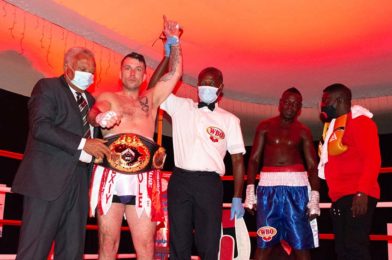 Fifty lucky fans were ringside to watch the UK’s most decorated boxer in action, as LET BATTLE COMMENCE IV was the first boxing ‘test’ event in Scotland, which hopefully will lead to more fans, preferably up to full capacity, being able to attend boxing events from next month as the pandemic restrictions are relaxed further.

Millions more tuned in to watch the live and free to view the Globally broadcast event on FITE, VIVA LIVE, PPV LIVE  as well as the numerous digital and linear channels that also carried the live broadcast.

There wasn’t that much action initially in the first round, so much so that world renowned Championship Referee Roger Barnor stepped in and ‘encouraged’ the protagonists to stop tentatively testing and throw some real punches in anger, which they did in style during the dying seconds of the round.

The first minute of the second stanza contained more action than the entire first round, albeit much of it being testing shots, well that is until around mid-point when McAllister burst into action, letting rip with a succession of blistering shots to send Djarbeng down to the canvas.

Have to say I was mightily surprised that Djarbeng was able to beat the count, but he did, and on the restart the ‘Aberdeen Assassin’ calmly strode over and let rip another flurry of scintillating powerful Exocets to body and head to send the Ghanaian to the deck for a second and surely final time – but no, much to everyone’s surprise Djarbeng, who was clearly in a lot of pain, once again managed to make it to his feet before Roger Barnor finished the count.

On the restart once again McAllister went on the attack, yet somehow Djarbeng managed to survive the onslaught and even let rip with some shots of his own.

Round three was an edgy affair, with both fighters working off their jabs, Djarbeng proved to be quite durable, I for one was surprised when he shrugged off some seriously vicious shots to the head as the round progressed.

The fourth was by far the best round so far, action wise, and once again the Ghanaian showed just how tough he was as once again he survived some seriously powerful shots, to both body and head, that clearly hurt him.

As the round progressed McAllister landed more big shots, after which Djarbeng would grab hold of the increasingly aggressive McAllister. This tactic didn’t do the Ghanaian many favours as the Aberdeen Assassin just kept letting rip and the inevitable happened, Djarbeng crashed to the deck for a third time following a huge right-left combination to the head, this time though Djarbeng just couldn’t rise to his feet and was clearly in a lot of pain. Referee Roger Barnor waived the fight off with just twelve seconds of the round remaining.

Preceding McAllister-Djarbeng was a fantastic lightweight contest between Denny’s Kevin Traynor and Tilbury Village’s debuting Jay Cartwright, who stepped in with just a day notice after Traynor’s original opponent Nicaraguan Jose Aguilar failed to gain entry into the UK after flying in from Spain.

The first round was phenomenal, it was all action with both protagonists giving everything for virtually every second of the round. I couldn’t split them and neither could referee Roger Barnor.

Round two was another full on war, boy oh boy did these warriors go for it!  However the pace had a seriously detrimental affect on Cartwright, he was out on his feet as he headed back to his corner at the end of the round, so much so that his corner summoned over Roger Barnor and retired his charge in the corner.

Plaudits to Jay Cartwright, he was expecting to be making his professional debut in Colchester on the 31st July 2021, yet bravely agreed to take the fight at very short notice, even though he had not had any time to prepare fully for this contest.

The third bout of the evening see Aberdeen’s Nathan Beattie in action against another late replacement, Belfast’s Marty Kayes who stepped in when Nicaraguan Christian Narvaez, who like Aguilar was refused entry to the UK after flying in from Spain as a replacement for original opponent Dundalk’s Michael Kelly.

At this point I think I should mention that it was Kayes’ wedding anniversary the following day and somehow got his wife Julia’s permission to cancel their planned evening out to take the fight, I think that may just set the scene perfectly.

Kayes was clearly in the mood for a good scrap, right from the opening bell of the contest he took control of centre ring and just kept forcing  Beattie onto the back foot before letting rip with shot after shot.

It really wasn’t that much different in the second, don’t get me wrong Beattie landed the best shots by far in each round, just not enough of them to secure either of the rounds.

Beattie started to get more proactive in the third and again landed the most telling shots, but still it was the Irishman that was dictating the proceedings, the same in the fourth and final round.

At the end of four action packed rounds Nate Dog’s fans were clearly expecting their hero to secure the win or at worse a draw, but when Referee Lee Murtagh’s scorecards were announced they fell into a stunned silence as they declared a 40-38 points victory in favour of Marty Kayes

The second fight of the night pitted Aberdeen’s Craig Dick (2-0-0) against Essex based Lithuanian hard-man Tomas Vaicickas (1-2-0) in a four round Heavyweight contest.

Dick is a renowned heavy hitter and Vaicickas is extremely durable, so nobody could or would have expected the contest to come to it’s conclusion after just 47 seconds, but it did, following Dick letting rip with a huge powerful hook to the body that sent the Lithuanian to the canvas just twenty seconds into the round.

I was surprised when Vaicickas made the count and continued but not that surprised he was to return to the deck seconds later following another big hook to the ribs.

What a cracking opening round, both lads vying to control centre ring, some very tasty bombs were thrown by both protagonists, a cracking round to watch.

Both lads started the second stanza more cautiously, Burns was the first to throw a big shot, but Allan, who is remarkably agile for a big lad, moved just enough to prevent it landing, Allan then took to the front foot backing up Burns before letting rip with a huge right to send the Irishman to the canvas.

Burns made the count, but on the restart Allan moved in and let rip with a big left, followed by a left-right combination that rocked Burns, Allan continued the assault with another powerful left-right to send Burns down for the second time .

Again Burns made the count, this time Allan stepped in on the restart and let rip with a massive right to send the tough as nails Irishman down to the canvas where he ended doubled up, Referee Lee Murtagh was so concerned he immediately waived the fight off and summoned Burns’ corner and the medical team to the ring.

I’m pleased to say the medical team wasn’t needed and the official time of the stoppage was one minute and fifty four seconds off the second round.

Have to say it was really great to be at an event with fans in attendance again, even though there was only fifty allowed, it may sound crazy but even though the fans were instructed by the authorities to stay seated and just offer polite clapping at the end of the fights, the atmosphere was so different from the ‘behind closed doors’ events that had preceded over the past year.

Finally if you missed the live broadcast of LET BATTLE COMMENCE IV, you can still catch up as free to view replays are available on FITE at https://www.fite.tv/watch/let-battle-commence-iv/2p9er/ – or check listings for replays on your local TV listings or if in UK the entire event will be available on demand via Sports Channel Network (Channel 265 on Freeview.YouView) from next weekend.