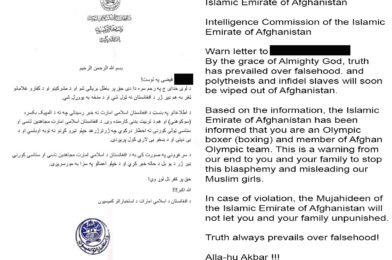 Now that the evacuation of UK and USA Military as well as officials and Afghans that worked directly for the Embassies, Military and NGOs of these two countries, most people, especially those still in hiding in Afghanistan and the UK public, seem to think that means the evacuation process is over as there had been no statement stating the process will continue, that is until this morning when Foreign Secretary Dominic Raab made a statement on BBC News.

Whilst unable to say when the evacuations of those vulnerable Afghan people, who had not directly worked for governments or military, would be able to restart, he did say that negotiations were taking place with bordering countries so the evacuation could continue.

This is good news for the many groups assisting Afghan people that are in danger, including ourselves, the British & Irish Boxing Authority, who are attempting to evacuate more than twenty male boxers, ten female boxers and their families as well as Athletes and Officials from the Afghanistan National Olympic Committee and the International Tennis Federation.

Many of the organisations, again like ourselves, have received little or no assistance or advice from the Government or exposure of the plight of the vulnerable Afghan People who are in danger of severe beatings or even death if they remain in the country.

Whilst I cannot speak of the experiences of the other groups, though I have been told about some of them, I can say what has been our experience over the past two weeks.

Initially we tried to locate twelve Afghan boxers licensed by ourselves via a social media campaign. Within hours we located ten of them.

We then began compiling a document containing all the information required to apply for Asylum status, including a short explanation of why they are at risk.

We then began contacting Government departments, including the Home Office, who we already deal with on a regular basis when arrange visas for overseas boxers that would be competing on UK events.

Unfortunately the phones were permanently engaged and we received no response to our initial e.mail, I suppose that is understandable as there would have been tens of thousands of Afghans, as well as their relatives calling for information regarding the evacuation as well as asylum processes etc at that time.

We then began contacting organisations such as the UN HCR, who were extremely helpful and provided us information re the UK Asylum process as well as direct contact to the UN HCR team in Kabul should we require some protection for those in hiding.

We also attempted to get the UK media to provide some exposure of the plight of the Boxers, however there was a distinct lack of interest from the major media players such as the BBC, as there were no British Passport holders involved, I should add I was actually told that!

Our small team, that consisted of our Director of Boxing Marianne Marston, our Lawyer Mahtab Aziz and myself decided we should begin making any arrangements we could to get the boxers to safety as well as have safe locations available in Pakistan for them to await the asylum to the UK.

Whilst I contacted Ahsan Abrar Khan at the Pakistan Professional Boxing Commission, who agreed to assist any of the Afghan Boxers and their families that makes it to Pakistan, Mahtab contacted Amir Khan, who kindly agreed we could use his Boxing Academy as a temporary place to house those we got to Pakistan.

Whilst all this was going on Lee Mcallister, who had called me to ask if he could help in anyway,  began contacting Aberdeen Council, re housing, as well as the Scottish immigration department, and achieved far more success there than I was receiving from Central Government as he managed to not just get to speak with people but also begin the processes.

We issued a press statement regarding Amir and Lee’s involvement, which we hoped may bring the spotlight on to the Afghan Boxers plight, but once again no interest from the mainstream UK Media, although the Boxing and Scottish media provided some limited exposure. – Read Article here.

Shortly after a number of Amateur Boxers, many of them female, contacted us and requested urgent assistance, and we began assisting them and their families also, suddenly those we were trying to help evacuate increased to just over seventy people.

It dawned on us that instead of this being a rather simple evacuation of a dozen people it was turning into a major operation and we needed help and fast.

Here we were four days in and with a growing number of people relying on us and still no luck getting real advice or assistance from UK Central Government.

We decided it was time to try and find help in the private sector, and thanks to former soldier and BIBA licensed boxer Matt Scriven and his fellow Afghanistan veteran Pete Crotty we were introduced to a CP Company that were evacuating diplomats from Kabul.

Lee Mcallister also came to our assistance and introduced us to Dean and Alana Stott who were also evacuating diplomats.

On the 23rd August we were informed that a Charter Plane had been arranged and was sent the manifest, which included the entire group of seventy-three people we were helping at the time, as well as documents that would enable them to enter the Airport.

Once the plane was on the ground we would have had seven hours to get everyone to the airport and a Kabul based team were ready to move, then we received notice that the evacuation could not take place, as clearances were not received (at this time we didn’t know why, but later found out that all private charter evacuation flights had permissions rescinded, again via a news report)

Around the same time we had learned that a number of the Boxers, both male and female, had received strongly worded letters from the Taliban and they were becoming seriously concerned for the safety of themselves and their families.

I shared these with the journalists I had spoken with previously, but again to no avail, the media were not interested as no British Passport holders affected.

Two of the female boxers were attacked by the Taliban, a male boxer had his car and home attacked and once more I informed the UK media, yet no interest in highlighting their plight, but they were giving airtime and headline status to Pen Farthing and his attempts to evacuate dogs and cats, as well as the Afghan workers, from his Animal Refuge.

I have to admit this incensed me that there was more concern in the media for the lives of abandoned Afghan cats and dogs than there was for the lives of the Afghan Sports Men and Women and their families, and once again wrote to the journalists, with exactly the same result not a single column inch or mention on the news channels as those we are helping were not British Passport holders.

The two evacuation teams we were dealing with advised us they would continue to try and get some on flights that were taking place, if places were available, which unfortunately none were up to the final flight last night.

Even today we are still receiving requests from other Boxers and Athletes in danger, as well as sports governing bodies such as the Afghanistan National Olympic Committee and the International Tennis Federation contacting us requesting assistance in evacuating Athletes and Officials who are in serious danger and as such we are now assisting in excess of a hundred people, each of whom is in danger of being attacked and probably killed should the Taliban track them down.

So what do we, and the other groups trying to get people evacuated and asylum status for those they are helping, do now, well in our case we are going to continue in our efforts to get every single person we are helping evacuated to safety as quickly as possible .

To this end we have been attempting to contact the new Head of Sports Directorate Mr Bashir Ahmad Rustamzai, the new Afghan Government’s Spokesman Dr Suhail Shaheen and any high ranking official from the new regime we can locate so that we can appeal for amnesty for the athletes and officials as well as negotiate safe passage to a bordering country.

More importantly we already have everything in place for either an air or ground evacuation and am hopeful that we can put one into action very soon, BUT WE STILL NEED HELP, preferably from the UK Government by them working directly with us to ensure Asylum status is provided for the one hundred plus athletes, officials and their families that we are assisting so that we can legally bring them direct to the UK, where they can begin to rebuild not just their lives but also their sporting careers.