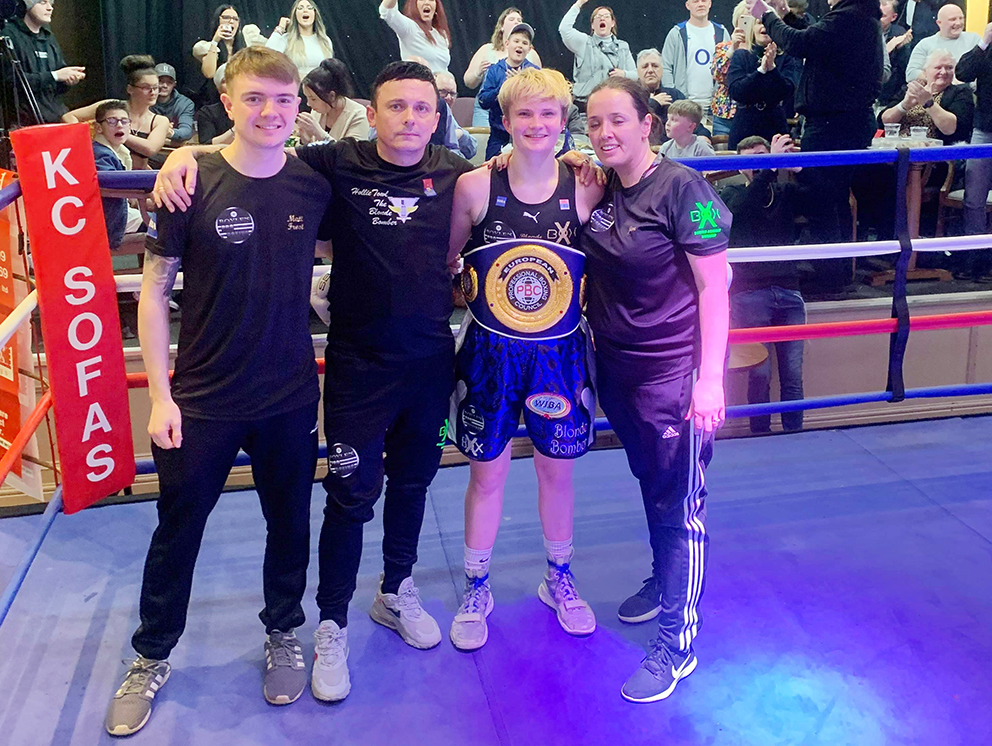 Hollie Towl may only be 18 years of age, but already she is competing at the highest level in the professional game, just as she did as an amateur, winning no less than five National championships as well as many other regional accolades.

Since turning pro in September 2020 the sensational teen has racked up an impressive 6-0-0 record and is the youngest World Champion, of either gender, having secured the Women’s International Boxing Association (WIBA) Featherweight World Championship back in September 2021, with a win over Argentina’s Cristina Del Valle Pacheco.

On Sunday afternoon Towl stepped up a division to challenge and beat former Italian Amateur National Champion Nadia Flalhi to secure the Professional Boxing Council (PBC) Super Featherweight European Championship by unanimous decision; winning every round on judges Carla Fox and Steve Tighe’s scorecards and winning all but three rounds which judge Adrian Thorne scored as drawn on his card.

On paper this was as as close to a genuine fifty-fifty contest you possibly wish for, exceptional amateur careers and both unbeaten as professionals, so no surprise then that the actual fight soon became a full on Battle Royale.

Right from the opening bell both sensational young warriors went into battle, it was breathtaking watching the contest unfold, initially Flalhi took full advantage of her height and superior reach to keep Towl at bay, but Towl is as savvy as they come and it wasn’t long before she used her exceptional ring craft to neutralise the Italian’s height and reach advantage, before letting rip with scintillating flurries and big shots to head and body.

As the fight progressed Flalhi adapted her game plan and drew the feisty teen to the inside, a plan that may have worked on others with less ability, but not with Towl, she was just as happy to go to war up close and took advantage of every opportunity that came her way.

In addition to the sensational Towl versus Flalhi finale of the Boyle Pro Boxing promoted event, the fans in attendance were treated to five further closely matched contests.

Worksop’s Eleanor Coulson extended her record to 5-1-0 after her opponent Aimee Moody was forced to retire at the end of the first with a serious knee injury.

Middleweight Cameron Moran took his record to 2-0-0 with a close victory over the extremely tough Afghan born Londoner Zahir Bennett. Moran versus Bennett was without doubt a leading candidate for Fight of the Night, as with Towl versus Flalhi it was an all action affair.

Chesterfield Super Middleweight Luke White endured a baptism of fire on his pro debut against Chessington, Surrey hard man Richard Harrison. White securing his first win as a pro by a 40-37 points victory.

Worksop’s Ben Gore made a surprise appearance, following debuting Jayden Harris pulling out the day before, and faced Belfast’s Marty Kayes. Clearly was worthwhile stepping up to the plate for Gore as Referee Adrian Thorne scored the contest in his favour 40-37.

Boxing fans will not have to wait long to watch these young warriors in action again, as Boyle’s Pro Boxing has another event planned at the Shirebrook Leisure Centre in Mansfield on the 26th March 2022, and as with Sunday’s event will be broadcast exclusively live on FITE, in association with KC Sofas, and word is Chris Boyle is contemplating Hollie Towl making her first defence of her WIBA Featherweight World title – watch this space!