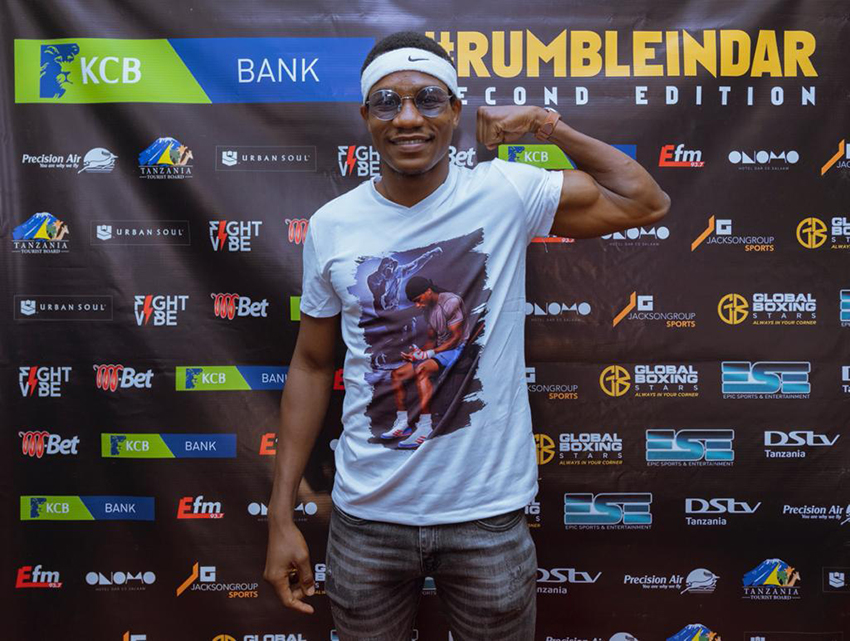 Tanzania’s World Boxing Federation (WBF) Intercontinental Super Welterweight Champion Hassan Mwakinyo (18-2-0) will be back in Championship action in front of a home crowd on the 28th May 2021, when he faces Zimbabwe’s unbeaten Brendon Dene 8-0-0 for the WBC Africa (African Boxing Union) title at the Next Door Arena in Dar es Salaam on the Global Boxing Stars, The Jackson Group and Epic Sports & Entertainment co-promoted Rumble In Dar Second Edition.

Back in 2018 Mwakinyo shocked the boxing world when he sensationally stopped Great Britain’s highly ranked Sam Eggington in just one minute of the second round on the undercard of the Amir Khan vs Samuel Vargas at the Arena Birmingham.

Mwakinyo’s victory over Eggington made the headlines across the world, as the British fighter was was the reigning IBO Continental Champion.  Despite the loss Eggington went on to become crowned the IBF World Champion the following year.

Since that sensational victory over Eggington Mwakinyo has won six times, four of these wins coming by way of stoppage, and secured Championship honours; The Universal Boxing Union (UBU) International, following a second round stoppage of fellow Tanzanian Joseph Sinkala and more recently the World Boxing Federation (WBF) Intercontinental crown, with a unanimous points decision over Democratic Republic of Congo’s Bebe Rico Tshibangu.

“Hassan, has so much potential and is probably one of the biggest secrets In the super welterweight division.

“He destroyed Sam Eggerton in the UK, and should have been a lot more highly rated after that fight. It’s now Hassan’s time and I’m excited to be promoting such a world class talent from Tanzania” said Scott Patrick Farrell, CEO Global Boxing Stars.

The second edition of the Rumble in Dar series, in association with the Tanzania Tourist Board #VisitTanzania, KCB Bank, Onomo Hotels, Urban Soul Apparel (Botswana) and M Bet, takes place at the Next Door Arena on Friday 28th May 2021 and will be broadcast live across Sub-Saharan Africa exclusively by Plus TV, which is available exclusively on DSTV channel number 294 in more than 30 African countries as well as syndicated globally to linear and digital channels (check local channel listings) and on-line on FITE.