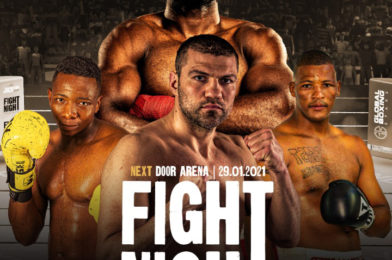 With the distinct lack of televised boxing events for fans of the pugilistic arts to watch in January 2021, due to the COVID-19 pandemic, Botswana based Global Boxing Stars and the Jackson Group have entered into an agreement with United Kingdom based Go Sports & Entertainment, for the world-wide broadcast distribution for a series of International Championship Boxing Events in Tanzania throughout 2021.

“It’s an exciting joint venture in a beautiful part of the world. The broadcast partners Azam TV are providing a world class production, and it’s refreshing to be working with great like minded people from Jackson Group Sports who have been instrumental in bringing this deal together” stated Global Boxing Stars CEO Scott Patrick Farrell, before adding “Get ready for the first of the Rumble In Dar boxing series on January 29th, non-stop action is guaranteed “

The first event takes place at the Next Door Arena, Masaki, Dar-Es-Salaam, Tanzania on the 29th January 2021.

Bulgaria’s Terval Pulev (15-0-0), the brother of Heavyweight Kubrat Pulev, who was KO’d by Anthony Joshua back in December, versus Namibia’s Vikapita Meroro (29-9-0) co-headlines the event along with Tanzania’s Ibrahim Class (24-6-0) versus South Africa based Malawian Dennis Mwale (8-0-0), who will be competing for the World Boxing Federation (WBFed) Intercontinental Lightweight Championship

The full line up for this exciting International show is:

In addition to the above event on the 21st January the dates for the full series of Global Boxing Stars and Jackson Group events in 2021 is:

Various broadcasters world-wide (National Broadcasters, Digital, Cable, Satellite as well as On-Line) have already been secured, however the full list of channels will be announced in the coming week or so once all syndication agreements are finalised.

The GSE developed Broadcast Distribution Network for the 29th January 2021 event is anticipated to provide Free to View access to around Three Quarter of a Billion Homes and Devices Globally.

Further details, as well as press releases, interviews and videos will be distributed over the coming days and weeks.