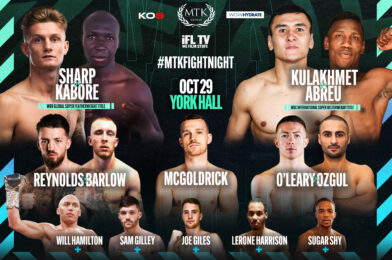 This month’s action-packed card will be broadcast live in the US on ESPN+ in association with Top Rank and worldwide on IFL TV, and is headlined by a WBO Global super-featherweight title fight between Archie Sharp (20-0, 9 KOs) and Alexis Boureima Kabore (28-4, 7 KOs).

O’Leary (7-0, 3 KOs) was last in action in June, where he produced a Knockout of the Year contender by viciously stopping Jan Marsalek in round two of their bout.

The 21-year-old Dubliner now squares off with Ozgul (15-6, 3 KOs), who is looking to replicate the form that saw him win the Southern Area super-lightweight title back in 2017, while he has also gone the distance with the likes of Viktor Postol, Anthony Yigit, Sean McComb and Samuel Antwi.

Welsh star Sean McGoldrick (10-1, 3 KOs) will also make his highly-anticipated return to the ring, as he is back in action for the first time in over 18 months when he faces Stephen Jackson.

The planned fight between Shabaz Masoud and James Beech Jnr has unfortunately been called off, after Beech tested positive for COVID-19.

Hard-hitting cruiserweight Will Hamilton (2-0, 1 KO) takes on Ivo Zednicek, plus three exciting debutants will enter the professional ranks on the card too, with ‘Sugar Shy’ Shiloh Defreitas facing Fonz Alexander, plus Joe Giles and Lerone Harrison will each compete, with opponents for those two announced shortly. 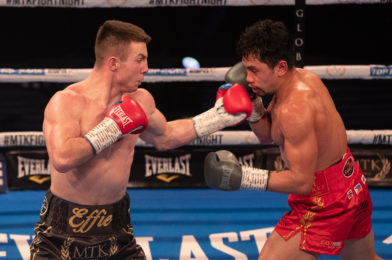 Pierce O’Leary is promising his best performance to date when he goes up against knockout artist Jan Marsalek on Friday’s star-studded #MTKFightNight.

The huge card takes place at the University of Bolton Stadium this week, and will be broadcast live on ESPN+ in association with Top Rank, and worldwide on IFL TV.

Marsalek (8-3, 7 KOs) is known for his big power, famously dropping Kelvin Davis in the final round of their bout on the Canelo vs. Billy Joe Saunders undercard last month, whilst also holding wins over Fatih Duebues and Christian Schemrbi.

It means that O’Leary (6-0, 2 KOs) is set for the toughest test of his career so far, but the unbeaten Dublin sensation is relishing the challenge.

O’Leary said:“I’m so excited to be getting back out again. I’ve been living away from family and my nine-month-old daughter for the past three months to keep learning and developing into the pro ranks with my coach.

“I don’t know much about my opponent other then he’s got eight wins and seven of those by knockout, but for me nothing changes. I’m just going out looking to put on my best performance to date. If I do that, it will be a really tough night for him and I possibly could get the stoppage.

“It has been great to keep the momentum going during the pandemic, but camps have been a lot longer with this circumstances as it’s hard to nail down a specific date, but June 25 has been nailed down a while now so I’m buzzing to return.

“Camp has been good. I’ve been giving it 120% and been fully focused on my training, plus I’ve been getting top sparring from highly ranked contenders and working solid in my strength and conditioning too.

“Jordan Reynolds has joined our gym too and is a fantastic talent and a true character. His buzz in the gym is phenomenal and it looks like he has gelled in really well with the coach & boys. Us being on the same show is nice because it means it’s business for us two and we’ll both get the win.

“I’m really happy for fans being back too, it’s been a long time coming and I can’t wait to hear the crowd roar. Hopefully we can get some more of my fans back in soon after the pandemic eases a lot more too.

“Once I get the victory here I’m looking to step the rounds up after this one and keep ranking up the wins, while still learning the trade to the fullest.”