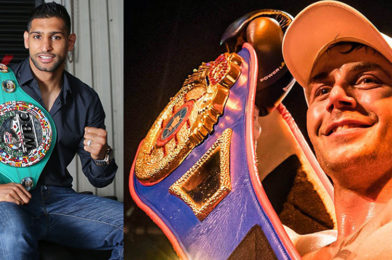 On Sunday night, as the news broke that the Taliban had taken the Afghanistan Capital Kabul, British & Irish Boxing Authority (BIBA) Vice President Gianluca Di Caro, along with BIBA’s Director of Boxing Marianne Marston and Lawyer Mahtab Aziz began trying to locate the Afghan professional boxers licensed by the UK based commission through it’s partnership with the Afghanistan Professional Boxing Commission.

Di Caro immediately made an appeal for information on the whereabouts of the Afghan boxers via social media and achieved some immediate response and was able to contact a handful of the boxers, as well as offers of assistance from WBO World Champion Amir Khan, six time five division World Champion Lee McAllister and Pakistan Professional Boxing Commission President Ahsan Abrar Khan.

PPBC President Ahsan Abrar Khan was the first to respond by offering assistance on the ground in Pakistan once the boxers are able to make it to Pakistan.

Shortly after both Amir Khan and Lee Mcallister offered to help by offering safe haven for the boxers and their families.

Earlier today Lee McAllister said; “The boxers are family as far as I am concerned and I can’t just sit here and watch what is unfolding in Afghanistan and do nothing.

“At Assassin Health & Fitness Village we always go above and beyond to help as many people as we can locally as well internationally as and when we can.

“When it comes to hard times like this seeing the boxers and their families in such danger the only option is to reach out and offer to help them as best we can.

“They haven’t asked to be put in this situation so the least we can do is try our best to help ease some of the pain and suffering by showing our support.

“Obviously we can’t help everyone but due to BIBA being involved with their local professional boxing commission it’s a no brainier that we try and push to help those first .

“Just hope and pray that they make it over safe.

“I also hope the British public and boxing community gets behind our efforts to give the families the chance of a new beginning while pushing for the boxers to continue to fulfil  their dreams while training and getting boxing bouts in the near future.”

“I can’t thank Amir, Lee, Ahsan, Mahtab and Marianne enough for stepping up to the plate and offering to help the boxers and their families.

“We know they are in genuine danger, not just because of their association with a British organisation like us.

“It wasn’t that long ago that there was an attack on the Afghanistan Professional Boxing Commission’s headquarters in Kabul by the Taliban, which at that time was in the supposedly ‘safe’ Green Zone. A number of people died in the attack, including security team members.

“Whilst very concerned about all the boxers there, have to admit am extremely worried for the safety of the Female boxers and officials there knowing the reputation of the Taliban attitude to and actions against educated Women.

“So far only three of those we are helping have managed to get out, Afghanistan Professional Boxing Commission Secretary General Shukrullah Fazilli and his sister Zarghona, who are now in Kazakhstan and Boxer Imran Nawabzai has made it to Pakistan, where Ahsan is providing assistance on the ground.

“I contacted the Home Office yesterday to request advice on how I can register the boxers and their families for UK Refugee status, unfortunately have yet to have a response from them. I suppose that is understandable as they are almost certainly being inundated with similar requests.

“We created an appeal for funds today, as we need to equip Amir’s gym in Islamabad to accommodate the boxers and their families when they get to Pakistan, so need to buy beds, bedding, cooking equipment and much, much more as well as arrange and pay for transport etc.

“BIBA has limited resources, which are virtually exhausted already, so am really hoping that the public and especially the boxing community will get behind our appeal so we can continue to help get the boxers and their families to safety in Pakistan, India or Kazakhstan, where we have been making arrangements to accommodate them, and eventually to the UK where we can begin helping them rebuild their lives and careers.”

PLEASE HELP BY DONATING AT https://www.paypal.com/biz/fund?id=U3VNCY5727ZNL