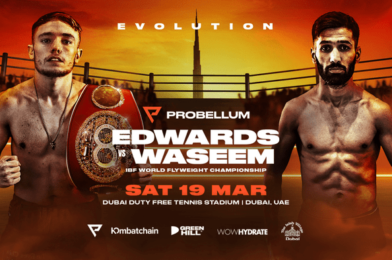 Probellum returns to Dubai in March for an action-packed weekend of elite-level boxing staged over two consecutive nights with an incredible card featuring a combination of current and former world champions, Olympic medalists and hugely talented young fighters.

Dubai Duty Free Tennis Stadium, located at The Irish Village, in association with Jumeirah Creekside Hotel, will host Probellum’s first shows of the year – and one of the UAE’s biggest-ever boxing showcases – on March 18 and 19.

The main and co-main event for night one will be announced this week, while two fantastic bouts top the bill on the second night, with IBF flyweight champion Sunny Edwards (17-0, 4 knockouts), from the UK, defending his title against Muhammad Waseem (12-1, 8 knockouts), one of Pakistan’s biggest boxing stars, in the headline contest.

That will be preceded by an intriguing clash between Ireland’s WBO intercontinental super-lightweight champion Tyrone McKenna (22-2-1, 6 knockouts) and Regis Prograis (26-1, 22 knockouts), the American former super-lightweight world champion who signed to Probellum in October.

“We are absolutely delighted to be returning to Dubai for our first event of 2022,” said Richard Schaefer, President of Probellum.

“Probellum has made a huge impact in the boxing world in a short period and we have some major plans for this year, starting with these two history-making shows in Dubai.

“There was a fantastic response to our first-ever event, which took place in Dubai at the end of last year, and we know there is a big appetite for boxing in the city.

“These two shows will feature many top-quality fighters from around the world, including Sunny Edwards, Muhammad Waseem, Tyrone McKenna, and Regis Prograis. We would encourage fans to secure tickets early in order to ensure they don’t miss out on what will undoubtedly be another fantastic event.”

With the shows taking place over St Patrick’s Day weekend, there will be an Irish theme to proceedings and more of the country’s most impressive boxers, in addition to McKenna, are set to be confirmed for the event over the coming weeks.

In the lead-up to the event there will be a week-long programme of entertainment including public workouts, press conferences and weigh-ins, along with a series of activations, while The Irish Village will be introducing special offers for those fans who purchase tickets for Fight Night.

Ticket prices start from 50 AED and are available to purchase from Friday, 28th January via Platinum List or in-person at The Irish Village, Al Garhoud and Studio City.