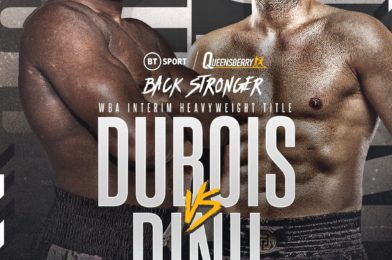 After a whirlwind few days where young Heavyweight superstar Daniel Dubois has been unexpectedly thrust back into the media spotlight, ‘Dynamite’ has now said it is “time to move on”.

Daniel was last seen in the ring on November 28 when he suffered a horrific eye injury at the hands of Joe Joyce.

In the wake of that shock defeat internet trolls, and even some within boxing, were keen to put the boot in on Dubois by questioning his decision to take a knee and end the bout.

One such figure was Billy Joe Saunders, who was vociferous in his criticism of the 23-year-old mild-mannered bruiser.

Those remarks would come back to bite Bill, who would fall to Canelo Alvarez after suffering a very similar injury.

Daniel says he understands why the fans and press alike have jumped on this ironic twist of fate but has insisted it is time to move on.

The ever-classy Dubois said: “I understand why everyone has wanted to make comparisons between me and Billy, but it’s time to move on now.

”Saunders is currently awaiting treatment at a hospital in Dallas and Dubois says it’s time to give him space to recover and regroup.

“Billy has had his injury, people have said what they’ve had to say but now it’s time to let him rest, heal and be with his family.

“It’s important for me to move on too. I’ve got a fight on June 5th with Bogdan Dinu that I need to get ready for.

”The Heavyweight collision with Romania’s Bogdan Dinu will be Dubois’ first taste of action since suffering his injury and he is keen to put the memories of that fateful night behind him.

“Over six months of frustrations are ready to come out. You are going to see the best version of Daniel Dubois in that ring on June 5th. I will beat Bogdan Dinu up and knock him out.”

Some may have expected young ‘Dynamite’ to have taken an easier fight for his return, but Dubois was keen to jump back in the mix and take on #2 ranked WBA Heavyweight Dinu with the WBA Interim title on the line.

“Dinu is a decent test. He does some things very well. He has fast hands and can move. He’s ranked #2 for a reason, and he’ll see this as a chance to get a title.”

Whilst Dubois is keen to move on from both the events of this past weekend in Texas and his own defeat in November last year, he understands that the only way to truly do that is deliver something spectacular in the ring.

At just 23-years-old, he will be looking to add a 15th career KO to his record and improve to 16-1 as a professional.

Dubois is fully aware of the question marks that surround him after the nature of his last defeat and he is confident he has all the answers.“I need to do what I do, show people why they called me ‘Dynamite’ in the first place” Dubois said, “It’ll be a devastating performance, I promise you. A huge knockout to put myself back on the map.”

‘BACK STRONGER: DUBOIS vs DINU’ IS LIVE ON BT SPORT 1 HD ON SATURDAY JUNE 5th