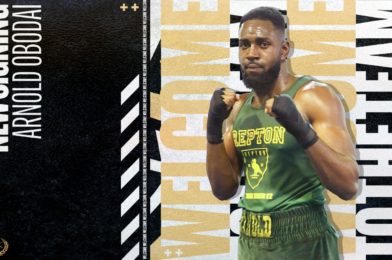 MTK Global is delighted to announce a managerial deal with two-time national amateur champion Arnold Obodai ahead of his plans to turn professional.

Sport has been a key part of Obodai’s life from a young age, playing basketball in the United States before turning to boxing when he returned to the UK at the age of 19.

Representing Repton ABC, Obodai won two national titles, and is now ready to make the transition from amateur into the paid ranks.

The London boxer recently signed a promotional deal with Queensberry Promotions too, and he is extremely pleased to be teaming up with MTK Global.

Obodai said:“I’m very excited about being managed by MTK Global. I know how well they look after their boxers and I’m glad to be a part of that. I’ve got a great team around me.

“MTK Global have some great champions and having a good management team around you is a contribution to success I believe. It’s a team effort although it’s you in the ring.

“I’m a two-time national champion, I won one in 91+kg category and under 91kg category, and now I want to reach the top and become a world champion.

“I want to have fun doing what I do in the process, but it’s one step at a time though. Fans can expect excitement from me!”

MTK Global Promoter Lee Eaton added:“We’re thrilled to welcome Arnold Obodai to the team. He showed in the amateurs exactly what he is capable of, and he will no doubt carry those talents into the professional ranks.”

News on when Obodai will make his professional debut will be announced in due course.