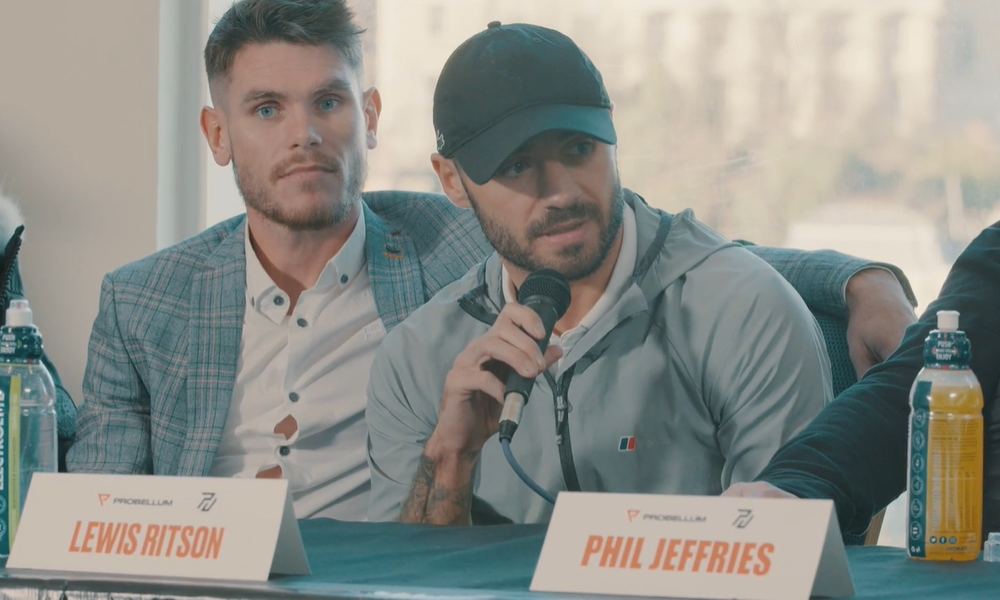 It will be shown live on Free Sports, BoxNation and Premier Sports in the UK, on Fight Network in the USA and Canada, plus more networks worldwide. Here’s what all the boxers had to say at today’s final press conference:

Ritson: “It was a massive setback in my last fight. It wasn’t the best of performances, but I’ll make that right on Saturday. I’ll get a good win and then we’ll get people talking about me again and the dream can stay alive.

“A lot of the fighters in the North East have fought at the Rainton Arena in their careers, and we’ll get plenty of fans in there and create plenty of noise. It’s going to be a good night.

“I’ll wait and see what Uruzquieta comes with and brings. We know he can box and fight a bit, but we’ve got a plan for what to do on the night.

“I’ve heard what Probellum’s next plan is, so I need to make sure I can get through Saturday and then get people talking about me again.”

Uruzquieta: “I’m very happy to be here. I want to thank God, Probellum and Miura Boxing. I’m happy to come back to Europe and this will be a fight that I will win.

“I’m a Mexican warrior, and I don’t know if I will win by points or knockout, but it will be a great fight and I will definitely win.”

Ward: “My opponent is a good fighter, and I’m looking forward to Saturday. I’ve been knocking on the door for a world title for a long time. I was one of the best super-bantamweights, but my shot never come, now I’m pushing on at featherweight.

“There are a lot of good guys there who I’d love to fight. Both me and my opponent on Saturday are ranked high with the WBA, and this is a fight that will push us closer to a shot at that title. Leo Santa Cruz still holds the Super title, and then you have Leigh Wood and Michael Conlan fighting next year too.

“There’s Emanuel Navarrete who I was chasing down at super-bantamweight and not many wanted to fight him. It seems to be the same for him at featherweight, but that’s a fight that I still want. I’ve got to get through Saturday and then we’ll see where I go.

“At super-bantamweight it was getting too hard to make the weight, and my best performances wouldn’t have come from me at that weight. It was time to move up, and now this is a really good division to be in.

“I want titles, so whoever has them is who I want to fight. Just send the contract over. I’ll travel to you and you can choose where you want to fight and you can pick what gloves, it doesn’t make a difference for me.

“You can expect a good performance from me on Saturday. The fans are the real winners, as Probellum are putting on this great show. Look at the talent you’ve got here, so thanks to them for this event.”

Padilla: “First of all I want to thank God. This is a fight that can lead to something big for me, and this is a great chance for me to be on the big stage, so it’s good for my career. I’ve got a good team with me, and I’m here to win. I’ve fought better rivals than Ward, and soon you’ll be hearing ‘and the new’ after this fight.”

Burns: “I’m looking forward to being back. I never say no to any opponent, and whatever names they give to me that’s who I’ll get in there with. This is my first fight back in two years, and in that two years there have been a lot of fights spoken about and a few dates that have fallen through.

“I’ve teamed up with new trainers and I’m training alongside Mark McKeown now, so I’m excited to put on a good show. After each fight I’m straight back in the gym, as boxing is one of those sports where if you don’t enjoy it, it’s too hard.

“I always drag myself out of bed at 6:30am to do the track work, and if I wasn’t good enough I’d be the first one who knows it’s time to call it a day. I was in a bad place after the Lee Selby fight, it was close but I thought I’d done enough to win.

“In the build up everybody just kept going on about my age and when I would retire. I was thinking ‘you do know I’m fighting on Saturday don’t you?’ It felt like I was being forced out, but thanks to Probellum for making this happen, and we’ll get down to business on Saturday.

Dickinson: “I want to start off by saying a big thank you to Probellum for this opportunity so quickly after my debut. My debut wasn’t broadcast on TV, so this time it’s going to be good to be shown properly as a fight in front of my home fans.”

Laws: “After the loss against Rylan Charlton, I went back to the drawing board and straight back into the gym and asked myself a lot of questions.

“I’m enjoying the ride and I’m training hard, and I hope that on Saturday I can perform exactly like I have been doing in the gym.”

McKeown: “I can’t wait to get in there on Saturday and showcase what I’ve got. Big thanks to Probellum for giving me the opportunity to be on a card as big as this, and I won’t disappoint.”

Promoter Phil Jeffies: “It’s great that Probellum is coming to the North East, especially with the likes of Lewis and Tommy. This show will be a sellout, and it will be rocking inside the Rainton Arena.