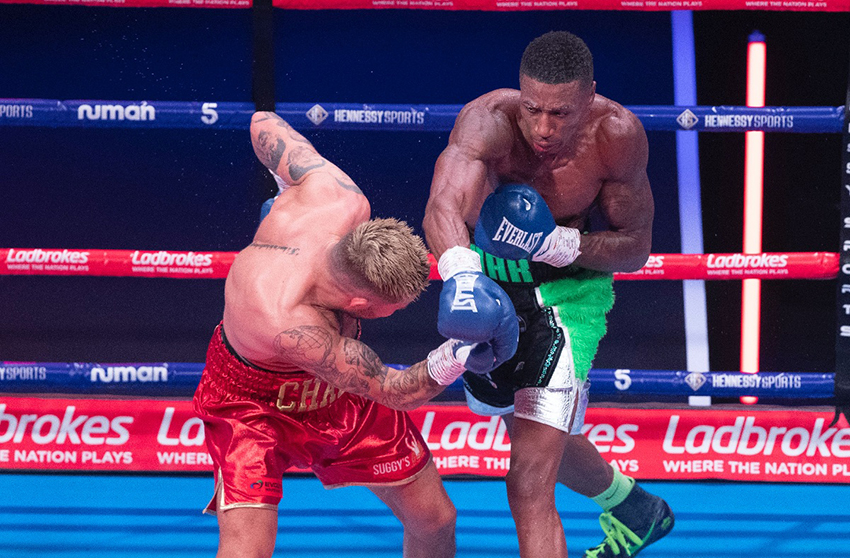 Pitters lost his British title to Richards last December when ahead on the judges’ scorecards he was stopped in the ninth round by the hard-hitting Londoner, but he wants to see his rival win the title which could set up future rematch between the pair.

‘Big Shak’ begins his comeback on Saturday 22nd May at the Coventry Skydome Arena, exclusively live and free on Channel 5, when he takes on Bradford’s Jermaine Springer in an eight-rounder on the undercard of the big showdown between Sam Eggington and Carlos Molina for the WBC Silver Middleweight Championship.

He said, “Anything can happen in boxing and he’s got a good chance tomorrow night.  He’s stepped up to face Bivol who’s unbeaten and won the world title in just his seventh fight and he can punch.  I’ve spoken to Richards since our fight and we’re cool, I wished him all the best and it’s great for British boxing if he wins.”

The 31-year-old from Birmingham is hungry to return to the ring and do a good job on Springer and then push his case for a championship title opportunity.

He added, “I’d like the rematch with Richards, but I’m not going to chase it, I’m going to focus on my own career and keep winning and get the belts coming in and then in time I’m sure we’ll meet again.”

“I’ve been working hard in the gym since the Richards fight with my trainer Jon Pegg and we’ve been focusing on ring generalship and aggression so you’ll be seeing a more attacking Shakan Pitters on his return,”

“I’m looking for a more clinical performance and do what I do best and show the skills and make a real statement.”

Presented by Hennessy Sports in association with William Hill, Infinitum, Numan, Everlast and King Carlos Promotions, Eggington v Molina will headline the exciting nine-fight card exclusively live and free-to-air across the UK and Ireland on Channel 5.

Also on the card, Coventry sensation River Wilson-Bent (8-0-0, 4 KO’s) makes the first defence of his Midlands Area Middleweight title against Derby’s George Farrell (5-0-0, 1 KO).  Former British Light-Heavyweight Champion Shakan Pitters  (14-1-0, 4 KO’s) has his first back against Bradford’s Jermaine Springer (7-2-0, 1 KO) in an eight-rounder since losing his title to Craig Richards last December.  County Monaghan super-lightweight dynamo Stephen ‘The Hitman’ McKenna (7-0-0, 7 KO’s) features in a six-rounder, but the undefeated red-hot 24-year-old prospect has not needed to go the distance yet with all his fights ending inside.  Birmingham middleweight bombshell Idris ‘The Bodybreaker’ Virgo (9-0-1, 1 KO) goes in over six-rounds.  Sevenoaks all-action super-welterweight  Michael Hennessy Jr. (5-1-1) is in a six-rounder against Warminster’s Paul Cummings.  Irish super-welterweight ace Brett McGinty (1-0) follows up his thrilling pro debut last December when he features in a four-rounder against Birmingham’s Josh Hodgins.  Brighton heavyweight talent Tommy Welch (1-0-0, 1 KO), son of the former British, Commonwealth and World Heavyweight title challenger Scott, follow’s up his explosive debut last December when he stopped Matt Gordon in the second round and features in a four-round contest.