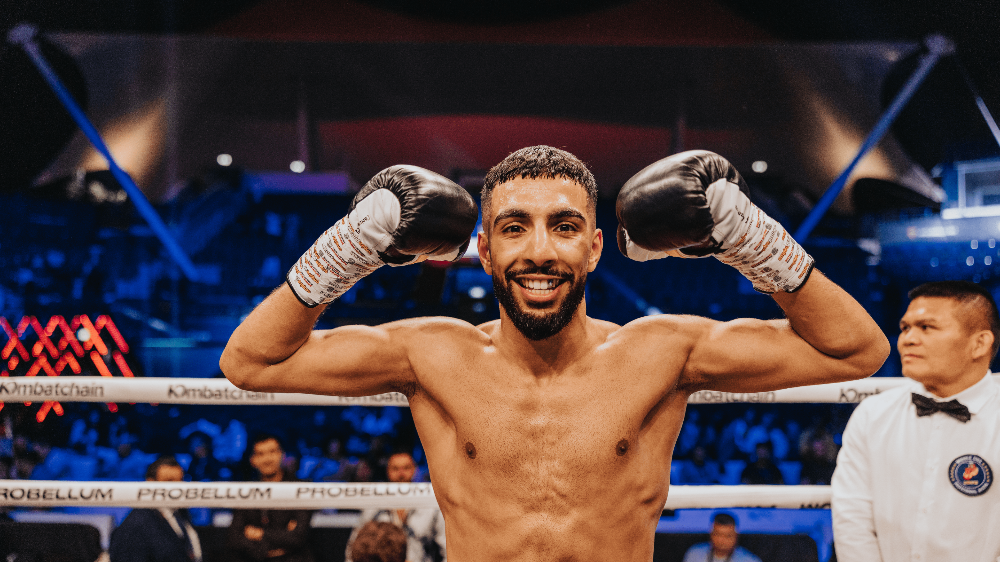 The ‘Maverick’ dazzled at Probellum Evolution and bamboozled his hugely experienced French rival, forcing him to quit at the end of the second of 10 scheduled rounds.

Masoud moves to 10-0 with this career-best win and said he wanted to leave his mark on the big stage in the Middle East.

“I came out for the first bell and I was looking for the stoppage – I wanted to make a bit of a statement,”said Masoud, who hails from Stoke-on-Trent.

Earlier on the stacked card, Bakhodir Jalolov took less than five rounds to cement his status as a future heavyweight champion with a brutal beatdown of Kamil Sokolowski.

The 6’7” Olympic gold medallist scored a knockdown in round two with a cuffing shot that Sokolowski brushed off but the Big Uzbek was repeatedly hurting his Polish opponent with backhands to the body.

At the beginning of round five, Jalolov made a telling breakthrough when his lethal left hand dropped Sokolowski just seconds after the bell.

Further punishment was dished out by a menacing Jalolov and Sokolowski fell to the canvas once more under a barrage of clubbing shots, prompting the referee to step in and bring a halt to the contest at 1:17 of the round five.

“I’m ready to compete with the best in the heavyweight division and I am coming for all of the belts, and I know my time is coming,” Jalolov said after the fight, as he moved to 10-0 as a professional, with as many knockouts.

Jalolov is being primed for a big fight in the United States this summer as he builds towards a shot at the heavyweight crown.

Sultan Al Nuaimi was next in action at the Dubai Duty Free Tennis Stadium, and the home fighter out-pointed Tanzania’s Hamza Mchanjo over six rounds.

Tom Hill of the United Kingdom was given the nod by all three ringside judges in his bout with Ireland’s Rohan Date.

Joshua Ridgewell dominated a blood-stained super-featherweight contest with India’s Suraj Ram.
Ridgewell, from Essex in England, was in control from the off and moved to 2-0 as a professional when the referee stopped the fight in round three due to a nasty cut above Ram’s right eye.

“I landed some really nice shot and stopped everything he was trying to do.”