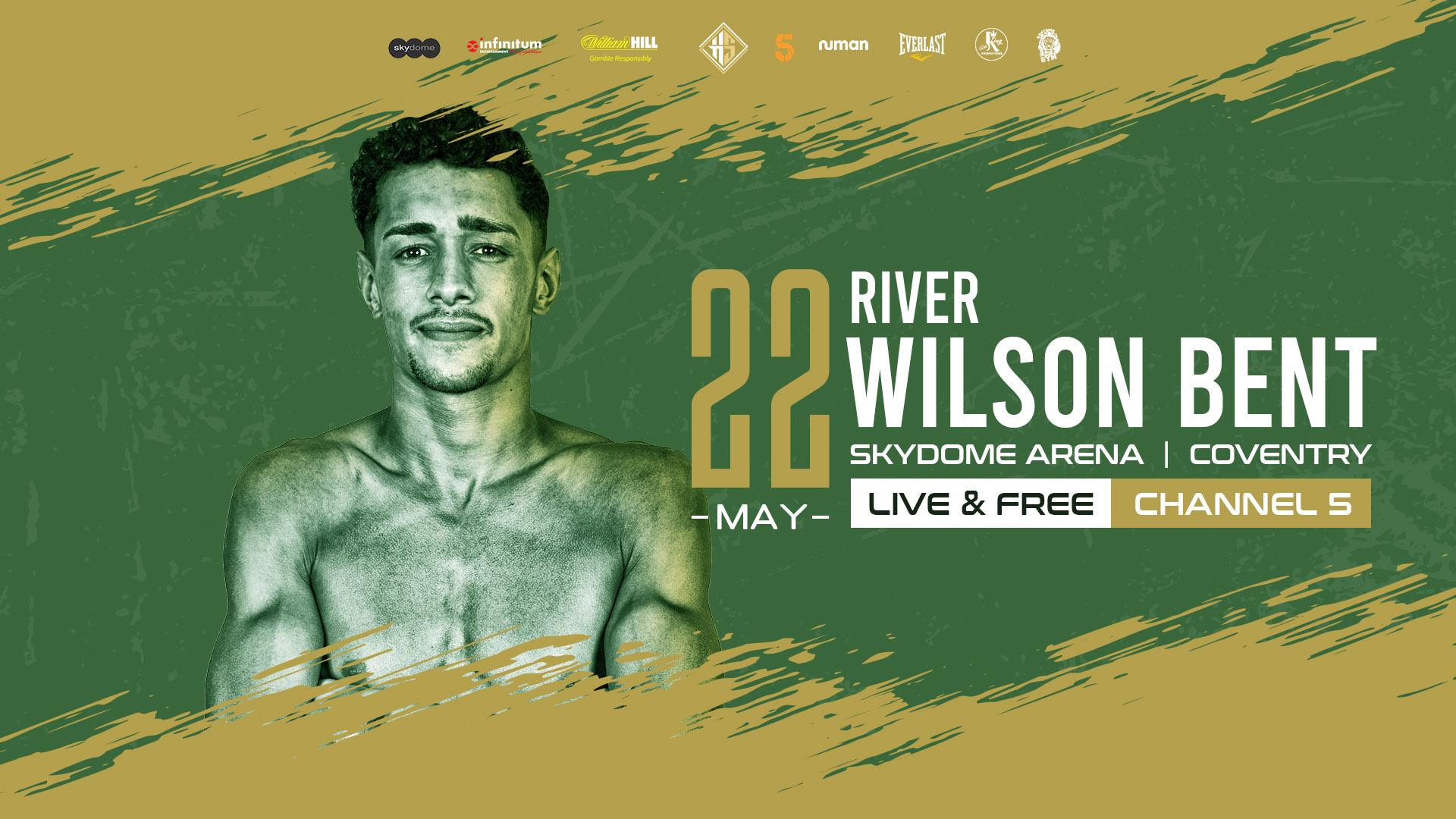 Dynamite-fisted River Wilson-Bent (8-0-0, 4 KO’s) is looking for another explosive KO win in the first defence of his Midlands Area Middleweight title on Saturday 22nd May at the Coventry Skydome Arena, exclusively live and free in the UK on Channel 5.

The red-hot unbeaten prospect from Exhall features in his home city for the first time as a champion when he takes on undefeated challenger George Farrell(5-0-1, 1 KO) from Derby.

Bent ended last year with a devastating third round knockout of Troy Coleman from a blockbuster right-hand that flattened his rival in one of the KO highlights of the year to win the title. The 27-year-old has been raring to go since then and can’t wait to climb through the ropes next month as he continues his march towards higher title honours in the 160 pound domestic division.

He said, “It seems like ages ago since that knockout win over Coleman in December and I really can’t wait to get back in action on the 22nd May,”

“That knockout was really beautiful, probably the best I’ve had in my career so far.  I know that I’ve got the power to hit and hurt opponents and make them stay down, but I’m not just reliant on my power, I’ve got sound boxing skills and I can go ten or twelve rounds at solid pace.  I know that my engine is there and I’ll be ready to go that distance if and when it comes,”

“Farrell looks good, he’s unbeaten and he fancies his chances against me so he’s taken the fight.  I’ll be ready for him and I’ll have an answer for anything he brings.  I know he likes to come forward and he’ll walk onto something big from me.”

Bent, who’s exciting, hard-hitting, style has attracted a massive following in Coventry, believes he can start a renaissance of boxing in the once popular fight city that has produced champions including Dean Pithie, Neil Simpson, Richard Evatt, Steven Bendall and Andy Halder.

He continued, “It’s a dream to be fighting in my home city of Coventry as a champion for the first time and I want to be headlining here in the future and become a big attraction with more titles and hopefully, one day, a World title, that would be a dream,”

“Coventry has been a bit quiet recently on the boxing scene, we’ve had many great fighters and champions hailing from here from Dean Pithie to Andy Halder over the years and I’d love to change that and get boxing back on the map here and make it a major fight city for a new generation of fans.”

Bent watched the big middleweight fight between Denzel Bentley and Felix Cash for the British and Commonwealth titles on Saturday night and was shocked by the result that saw Cash destroy Bentley in three rounds.

He added, “I’d sparred 30 or 40 rounds with Bentley and he did great, I would never have expected that outcome. For some reason Bentley just didn’t get going in the fight.  Cash took the opportunity and made it his, fair play to him.  Once those small gloves go on your fists it’s a different game,”

“I know I’ll be up for the British and Commonwealth belts in the not-too-distant future and when the time comes I’ll be ready for them.  Right now I’m concentrating on Farrell and making sure I get the win.”

County Monaghan super-lightweight dynamo Stephen ‘The Hitman’ McKenna (7-0-0, 7 KO’s) features in a six-rounder, but the undefeated red-hot 24-year-old prospect has not needed to go the distance yet with all his fights ending inside.  Birmingham middleweight bombshell Idris ‘The Bodybreaker’ Virgo (9-0-1, 1 KO) goes in over six-rounds.  Sevenoaks all-action super-welterweight  Michael Hennessy Jr. (5-1-1) is in a six-rounder against Warminster’s Paul Cummings.

Irish super-welterweight ace Brett McGinty (1-0) follows up his thrilling pro debut last December when he features in a four-rounder against Birmingham’s Josh Hodgins.  Brighton heavyweight talent Tommy Welch (1-0-0, 1 KO), son of the former British, Commonwealth and World Heavyweight title challenger Scott, will follow up his explosive debut last December when he stopped Matt Gordon in the second round and features in a four-round contest.