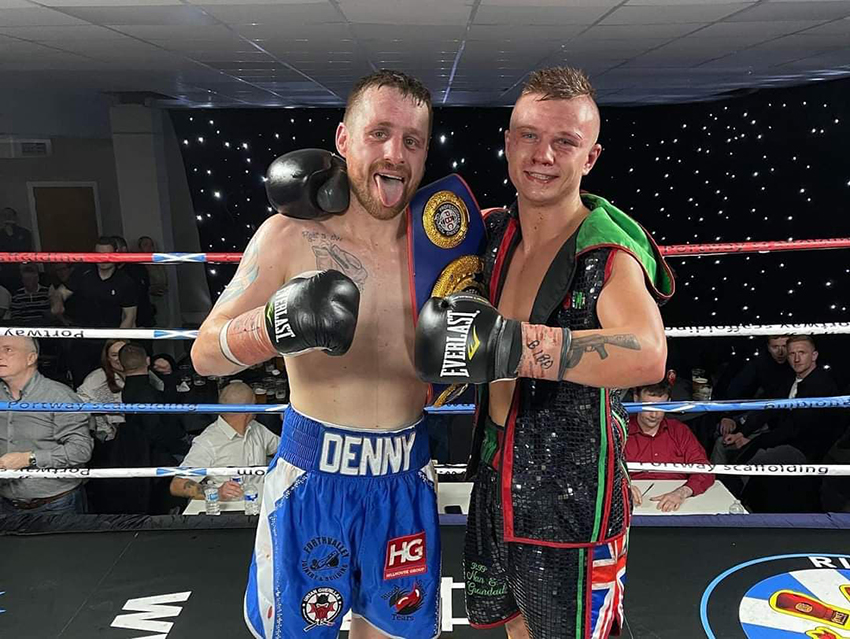 The heavily hyped title clash exceeded all expectations, it was an exceptional closely fought twelve round Battle Royale and rightly is being touted as a leading contender for FIGHT OF THE YEAR accolades.

No surprise really as both warriors went at it hammer and tongs for the full twelve rounds, much to the delight of the fans in attendance as well as those around the world that watched the sensational contest live on FITE+

Speaking from his home, following some well earned rest and relaxation with his family, Traynor said;

“The fight had been built up for the past year or so and I think it definitely lived up to expectations, and much more.

“Lewis was a great opponent very, very explosive but I kept my cool stuck to my game plan and everything went exactly the way I felt that it would, only thing I didn’t expect was for it to go the distance, I thought I would have got him out of there but the lad proved how tough he was.

“I knew how dangerous he would be early and the first three or four rounds would be the toughest, but I remained composed and continued to box smart before stepping it up later in the fight.

“It was a fantastic fight to be involved in and was an excellent experience fighting in my first twelve round fight.

“I enjoyed every second on it and would like to thank Lewis for being a fantastic dance partner, he is only a young lad and can definitely come again and do some great things in the sport.

“As for myself I’m not 100% sure what is next for me, I had a great camp for the fight but with my baby son being born it was hard to train the 2 or 3 times a day, work and be a dad so I will spend some time with my family consider what options I have then take it from there.

“Thanks to Lee McAllister, Assassin Promotions, BIBA and the PBC for the opportunity to fight for my first Championship, it has been a great journey so far and much, much more to come.”

In addition to the sensational Traynor versus Mulberry potential FOTY title clash, fans in attendance, as well as those watching on FITE+ were treated to a night of sensational closely matched contests, the standouts being;

The opening contest of the night see Aberdeen’s Samer Carol (1-1-0) and Newcastle’s Jak Johnson (1-4-0) in action against each other.

Originally Carol was due to face India’s Jaideep Singh (0-1-0) and Johnson was matched against India’s Sukhdeep Singh (1-0-0), however both Indian lads visas were not through in time, so some quick rejigging of the card led to the pair squaring off against each other in a fantastic all action, closely fought four rounder that had the potential of being Fight of the Night, had it not been for the exceptional Traynor-Mulberry title clash.  After four all action rounds Referee James Ancliff’s scorecard read 39-39, it was that close!

Unbeaten Liam Allan (3-0-0 3KO) had his hands full when he faced late replacement in Kent’s Adam Harris (Debut), in a four round Heavyweight contest.

What a cracking fight, it was hard to believe it was at Heavyweight as the action was more akin to a Super Middle contest, and what’s more Harris became the first fighter to go the distance, in the pro ranks, with the big punching Aberdeen youngster. Referee James Ancliff scored the contest 40-36 in favour of Liam Allan.

Paisley’s Craig Kelly (11-15-1 2KO) was expecting a really testing full on nights work, when he faced Accra Ghana’s big punching Theophilus Ofei Dodoo (9-2-0 9KO), however fate stepped in to cut the fight short, as Dodoo suffered a serious hand injury during the first stanza that forced him to retire at the end of the round. However believe me the first round is definitely worth watching on FITE+ as it was one seriously great all action affair.

Another fight that only went one round was the heavyweight clash between Barrow’s Lee Kellett and Belfast’s Darren Burns. This was another all action affair, that was until just seconds in to the second minute of the contest when Kellet let rip with a massive hook to send Burns crashing to deck.

Originally the event was due to be headlined by two time WBO Featherweight World Champion Scott Harrison versus Razak Nettey PBC Commonwealth title clash, however that contest was forced to be cancelled just thirty minutes or so before it was due to take place.