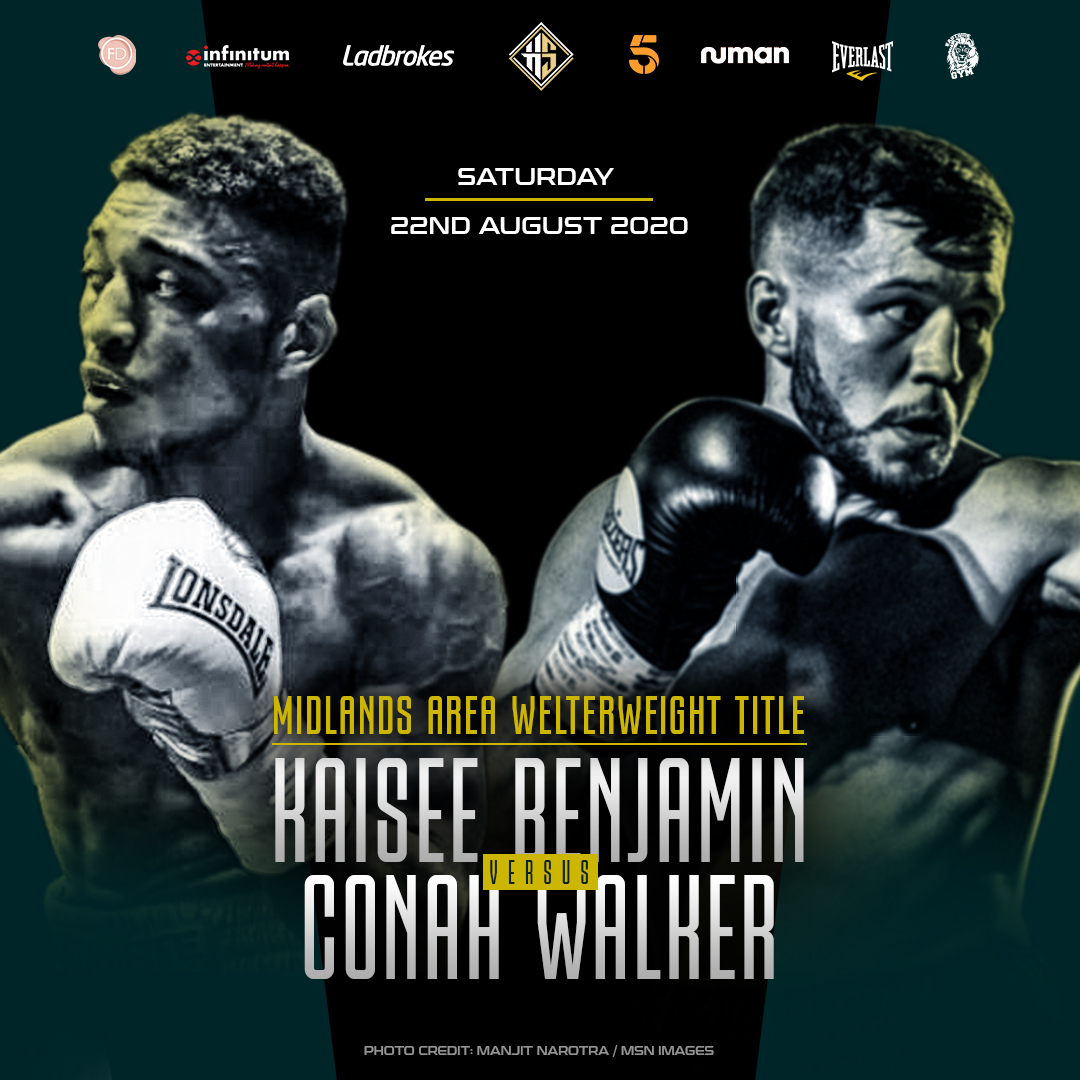 Promoter Mick Hennessy oversees the long-awaited return of Championship Boxing to UK free-to-view TV screens exclusively LIVE on Channel 5 on Saturday 22nd August and has added a further title fight to the show.

The five-fight card, presented by Hennessy Sports in association with Ladbrokes, Infinitum and Numan, will be staged behind-closed doors at a purpose built production studio and is headlined with the long-awaited battle for the Vacant British Light-Heavyweight title between Shakan Pitters and Chad Sugden.

Hennessy is delighted to bolster the big fight-night with a sizzling Midlands derby that pits Birmingham’s Kaicee Benjamin and Wolverhampton’s Conah Walker in a fiery clash for the Vacant Midlands Area Welterweight Title with plenty of pride and honour at stake.

All-action Benjamin (10-0-1, 2 KO’s), the former Midlands Area Champion, is in fine recent form having made two defences of the title and seen off three unbeaten fighters (Shaquille Day, Levi Ferguson and Alex Fearon) in his last four fights.

Rival Walker (7-0-1, 2 KO’s) will be looking to cause an upset and beat the favourite Benjamin to prove that he is the real deal.  The former standout amateur took the unbeaten record of Nathan Bendon and then forced then unbeaten Ohio Kain Iremiren to a draw and is pumped up for the challenge against Benjamin

Hennessy said, “It’s fast building momentum towards an exciting and long-awaited return for British boxing on the free-to-air TV platform Channel 5 on August 22nd.  We’ve got a fantastic main-event in place with the British Light-Heavyweight title showdown between Shakan and Chad and that is now complimented with a Midlands Area title clash between Kaicee and Conah.  Not only that, but we have the exciting return of cruiserweight star Isaac who’s on the road back towards challenging for titles, plus reality TV star Idris and young prospect Michael complete the card.  This is a statement that our sport is finally back and where it belongs on the big-stage on free-to-air Channel 5 for everyone to watch without having to pay.”