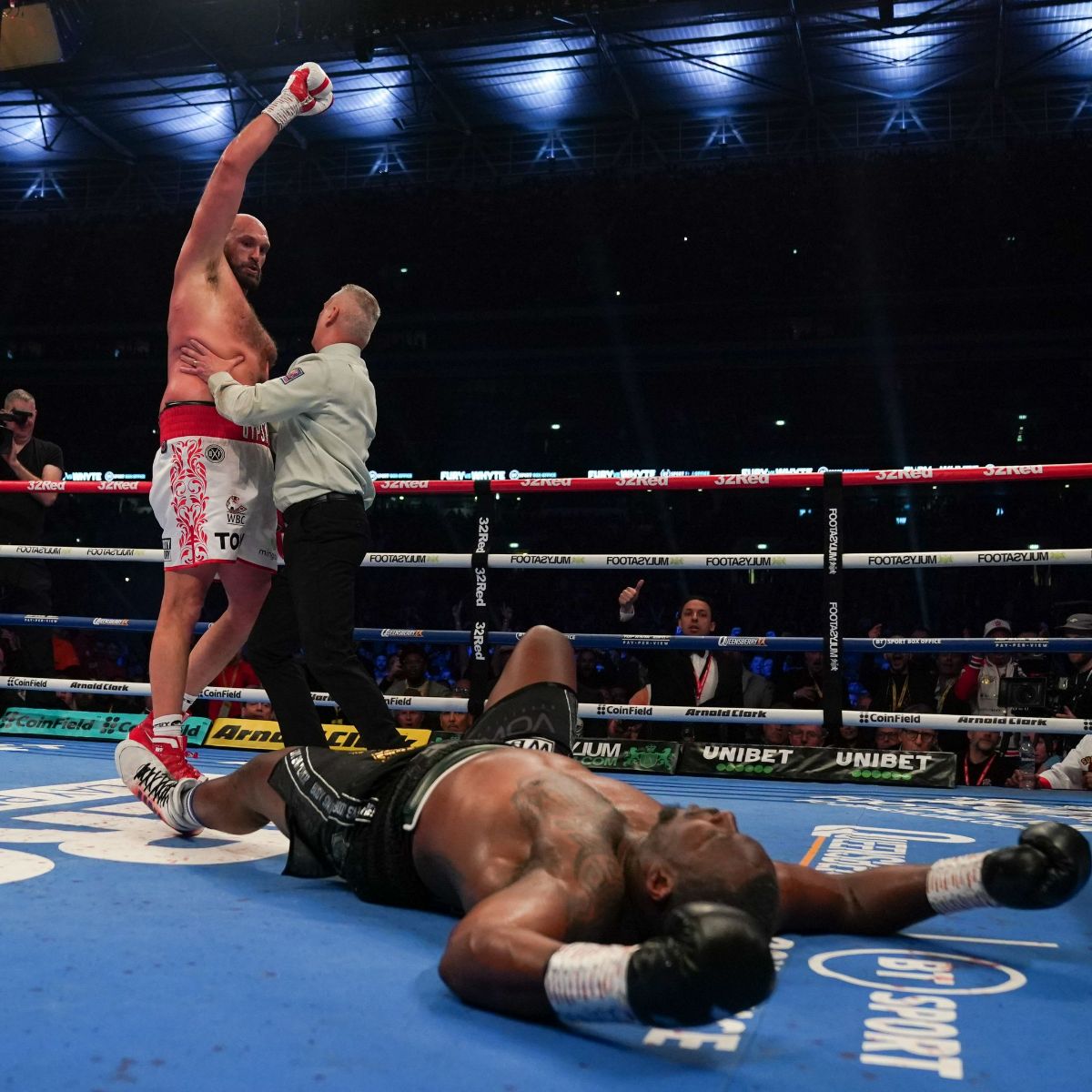 In front of a record boxing crowd, Fury established the upper hand right from the off with the crisper work that nullified the bullish intentions of the rugged Londoner.

The fight became a roughhouse at times and referee Mark Lyson was kept busy issuing warnings to both fighters.

Fury began to land more telling blows in the fifth round as Whyte appeared to tire a little in frustration at barely being able to land a glove on the champion.

Then, in the sixth round, Fury unleashed a show stopping right uppercut that snapped into the jaw of Whyte, who fell heavily to the floor. He got up before 10 but was wobbling on his feet and an invitation to walk towards Mark Lyson resulted in him lurching forward, clearly unable to continue.

The official time of the stoppage was 2.59 of round 6.

“I am overwhelmed with the support,” said Fury in the ring. “From the bottom of my heart, thank you so much. Dillian Whyte is a warrior and he will be a world champion. It is unfortunate he had to face me, the best man on the planet.

“I think even Lennox Lewis would have been proud of that uppercut.”

Ekow Essuman retained his welterweight title-treble – British, Commonwealth and IBF European – with a decision victory over his challenger Darren Tetley.

In a fight that never really caught fire, what we got was a cagey, nip and tuck encounter that Essuman appeared to edge from around the halfway stage after a decent start from Tetley.

In a featherweight humdinger, Nick Ball seized the WBC Silver title with a brutal defeat of the far more experienced Isaac Lowe. Referee Victor Loughlin stopped the fight as the towel came in after 1.45 of the sixth round.

From a clinch, Ball spun his opponent into the corner with his head moving outside of the ropes. Ball held off until he was back in the ring and, with no intervention from the referee, unleashed two mighty right hooks that ended the fight.

Ball plonked Lowe onto the canvas in round two via a left hook and Lowe also came off worse in a clash of heads in the following round that resulted in a deep gash above his left eye.

Lowe rallied, knowing time was now against him, but it was Ball who always carried the threat and he is now a champion.

Heavyweight hopeful David Adeleye inflicted a rare stoppage defeat on Central Area champion Chris Healey when a monster left hook and ramrod right hand had the Stockport man out on his feet and referee Chas Coakley stepped in to prevent a canvas filled finish. The fight was stopped after 52 seconds of the fourth round.

Tommy Fury moved himself to 8-0 as a pro with a convincing victory over the previously 10-1 Daniel Bocianski, with Kieran McCann calling a margin of 60-54 over six rounds. Fury felled the Pole with a huge right hand in round five, but the brave Bocianski held on to reach the final bell.

At light heavyweight Karol Itauma made quick work of his Polish opponent Michal Ciach, putting him down twice before referee Chas Coakley had seen enough after 2.27 of the second round

Early on in the evening, teenage prodigy Royston Barney-Smith made it 2-0 as a pro with a 40-36 victory over Constantin Radoi, scored by referee Kieran McCann.