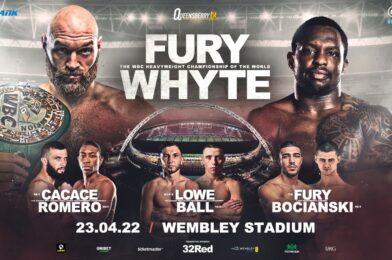 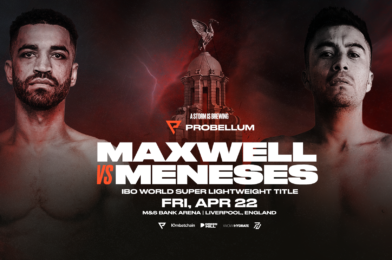 Sam Maxwell hopes to walk in the footsteps of Manny Pacquiao and Ricky Hatton by winning the IBO super-lightweight world title later this month.

The 33-year-old faces Alejandro Meneses at Probellum Liverpool on April 22 on a massive night of world championship boxing in one of Britain’s boxing hotbeds.

The unbeaten Maxwell, a Commonwealth Games bronze medallist in the amateurs, stayed up into the early hours of the morning to watch Pacquiao and Hatton’s 2009 mega fight in Las Vegas, when the IBO crown was on the line.

Maxwell, nicknamed ‘Super Sam’, finds it surreal that he will now be competing for that same title later this month in front of a packed arena in Liverpool.

“My career has been building to this moment,” said the 16-0 Sam Maxwell.

“I won the WBO European title, then British and the Commonwealth belts and how I have this huge fight for the IBO world title.

“I feel lucky to be handed this opportunity and I will make the most of it.

“Ricky Hatton and Manny Pacquiao have held the title so it’s a belt with a lot of history.

“I watched those Hatton and Pacquiao fights, including when they fought each other, and so it is absolutely crazy to think I will now be fighting for that title.”

Richard Schaefer, President of Probellum said: “The 140lbs division is on fire now and by winning the IBO world title, Sam can put himself in the frame for some career-defining fights.

“The world of boxing is expecting Josh Taylor to vacate his belts and move up to 147lbs and, as Sam says, that would create massive opportunities in the division for many fighters, including Maxwell.

“Probellum is thrilled to be able to deliver this fight for Sam and put it on a brilliant card in Liverpool later this month.  We can’t wait for our first event in one of the UK’s biggest fight cities.”

Probellum, the fastest growing brand in the sport, have signed some of world boxing’s leading fighters in the 140lbs division, since launching in September last year.

Jack Catterall, the People’s Champion, signed for Probellum in March and joined Regis Prograis, who has become the mandatory challenger for the WBC title, following a win over Tyrone McKenna in Dubai.

Lewis Ritson kept his world title aspirations alive with a win over Dejan Zlaticanin in Newcastle last month and is on a collision course with the world ranked Ohara Davies, while former world champion Ricky Burns is part of the Probellum stable and made his comeback in December.