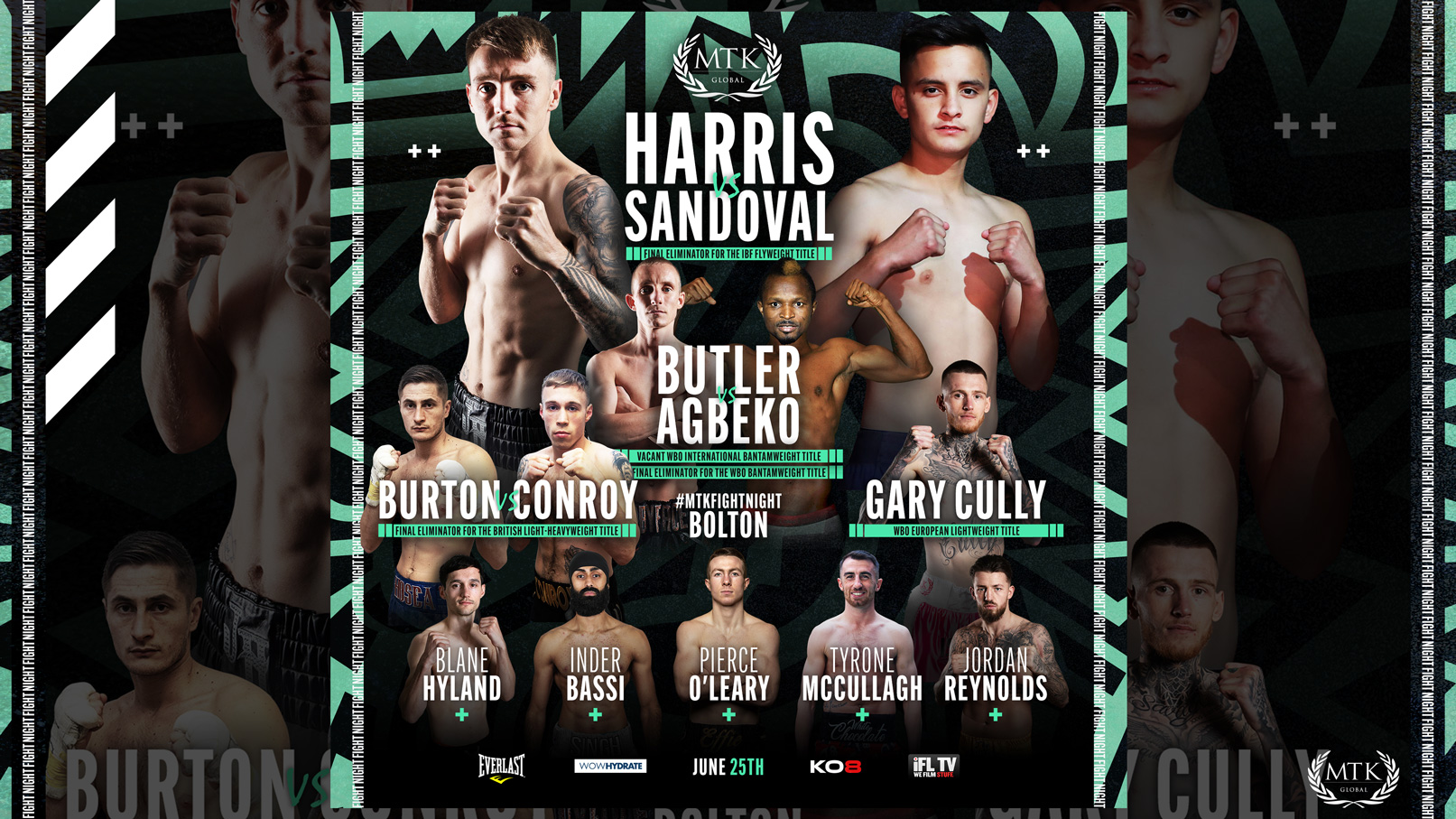 MTK Fight Night will make its triumphant return later this month with a sensational event – featuring two title fights, three final eliminators, and some of the best fighters from the UK and Ireland.

The action-packed card will be held at the University of Bolton Stadium on Friday 25 June, and will be broadcast live on ESPN+ in association with Top Rank in the US, and worldwide on IFL TV.

Discussions are currently ongoing regarding having fans in attendance for the show, with an update expected early next week.

In the main event, Welsh hero Jay Harris (18-1, 9 KOs) will look to earn another crack at world honours when he goes up against hard-hitting Ricardo Sandoval (18-1, 13 KOs) in a 12-round final eliminator for the IBF flyweight title, currently held by Sunny Edwards.

The bill also sees two former world champions collide as Paul Butler (32-2 15 KOs) meets Joseph Agbeko (38-5, 28 KOs) over 10 rounds for the vacant WBO International bantamweight title, with the fight serving as a final eliminator for the WBO bantamweight title too.

Elsewhere at the event, Dublin sensation Pierce O’Leary (6-0, 2 KOs) returns, Jordan Reynolds (1-0) takes part in his second professional contest, and Tyrone McCullagh (14-1, 6 KOs) makes his long-awaited comeback after 16 months out of the ring.

MTK Global Promoter Lee Eaton said:“We are delighted to be back with a tremendous card later this month which is full of competitive 50-50 fights.

“Jay Harris has been desperate for this fight with Ricardo Sandoval for a while so we are thrilled to be working with Golden Boy so that it is finally here. It is certain to be non-stop action from start to finish and we’re hopeful that Jay can get the win and move a step closer to another world title shot.

“The same can be said for Paul Butler. He is on the cusp of another world title shot but knows he can’t look past Joseph Agbeko, who has shared the ring with Guillermo Rigondeaux and Abner Mares in his career, and heads into this fight on the back of nine straight victories.

“The fantastic fight between Hosea Burton and Liam Conroy could steal the show, and it’s great to see Gary Cully back defending his title after his blistering stoppage win last time out.

“We have some of the best rising stars in action too with Pierce O’Leary and Jordan Reynolds both on the card, plus extremely talented fighters like Tyrone McCullagh, Blane Hyland and Inder Bassi, so it’s certain to be a brilliant event on June 25.”

Further news on the upcoming MTK Fight Night on June 25 will be released in due course.