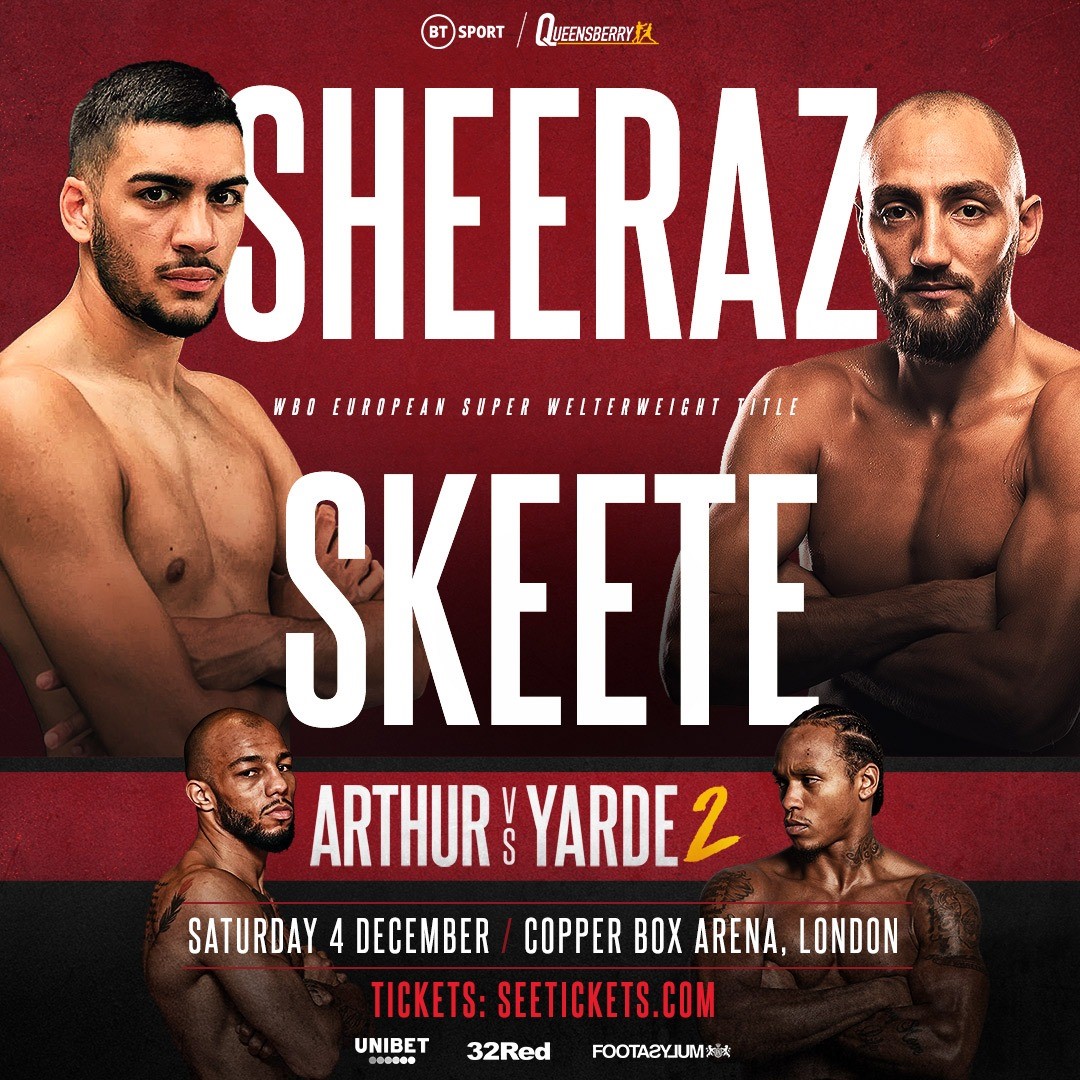 It’s the biggest fight so far in the career of Sheeraz who is one of British boxing’s best upcoming talents.

Londoner Skeete (29-3, 14 KOs) has mixed it with the best and made three unbeaten defences of the British Welterweight title that he took from Sam Eggington before relinquishing the belt.

Ilford’s Sheeraz (13-0, 9 KOs) who now trains in California will be making the fourth defence of his belt and bidding for an eighth consecutive inside the distance win.

The high class card is headed by the blockbuster Light-Heavyweight rematch between Commonwealth champion Lyndon Arthur and Anthony Yarde.

“I am looking forward to facing Bradley Skeete on December 4 and it’s going to be an unbelievable fight for the fans to witness,” said Sheeraz.

“He’s won titles and is a technically experienced fighter and this makes it exciting. I’m coming to win and I will win.”

“I’ve been training away from home in the USA out of my comfort zone, away from family and friends. I like him as a fighter but on Dec 4 in the ring I’m going to beat him.

“Bradley is a good step-up opponent for me. I believe I will have too much for him come fight night. I’m looking to make a big statement and show the world I belong with the best at 154.”

Skeete is now back in business, training up in Sheffield with Dominic Ingle and had a run-out in June, scoring a third round stoppage over Dale Arrowsmith.

He insists he is a rejuvenated fighter ready to enjoy a successful swansong to his professional career.

“Obviously before I fell out of love with boxing but now I am the old me, I am buzzing,” insisted Skeete. “I am back where I started and it is a very good fight for me. In their eyes I have been there and done it and they will be looking to take my scalp. They obviously think I am at the back end of my career and I will be a good name for him but, and I am not just saying it, I love boxing again and I feel so good after a good long break.

“It is like a new lease of life. I go back a long way with Al (former trainer, Smith), but I just needed a break for one and a fresh start for two. I am doing what I do and enjoying it, now I am ready to go again and to come back in a good fight like this against Hamzah is perfect.

“He is a young, fresh champion with big things being said about him. But, listen, with my experience I am very, very confident. It is my biggest domestic fight since Sam Eggington and look how I performed on that night.

“I’ve sparred Hamzah before and he came down the gym around the time he turned pro, I think. In his early career he was coming up on my undercards or similar cards to me. He’s got a big following, he’s been guided right and he can fight.

“He is nice and tall, which is something I am not used to saying about my opponents, he can fight and he is a good kid. I’ve got no bad words to say about him and he is at the stage of his career where he needs a step-up because he hasn’t really been put in with a test yet.

“I am sure Frank and the people around him want to see if he is the real deal. He is fighting me and, after some time off, I am fresh and this is my night.”

Hall of Fame promoter Frank Warren said: “Hamzah versus Bradley is a great fight and fitting for such a strong card.

“Since we signed Hamzah to Queensberry I have believed that he has World title potential and his fight against Bradley will be a breakout fight.

“He has gone about his business without fuss and the improvement in every fight is clear to see. I believe that this fight is the right step up at the right time.

“I promoted Bradley for much of his career. I know just how skilful and talented that he is. He won a British title and other titles with us. Now he is back to try and win another title belt.

“There are few nicer boxers to meet than Bradley, but for once I will be in the opposing corner on December 4.”

Sheeraz won his WBO European crown almost two years ago when he stopped Ryan Kelly inside six rounds and has made subsequent defences against Paul Kean, Guido Nicolas Pitto and Ezequiel Gurria.

Earlier this year he moved his training base to Los Angeles where he is training under experienced Ricky Funez at the Ten Goose gym in Los Angeles.

Hamzah, 22,  is now highly ranked in the WBO ratings for their World crown held by Argentina’s Brian Castano.

Skeete, 34, outpointed Eggington to become British and Commonwealth champion in March 2016. He then made his domestic title defences against John Thain, Shayne Singleton and Dale Evans to win his Lonsdale belt outright.

After giving up that title, Kerman Lejarraga defeated him in a European title fight, but if he were to beat Sheeraz it would give him a ticket to the top once again.