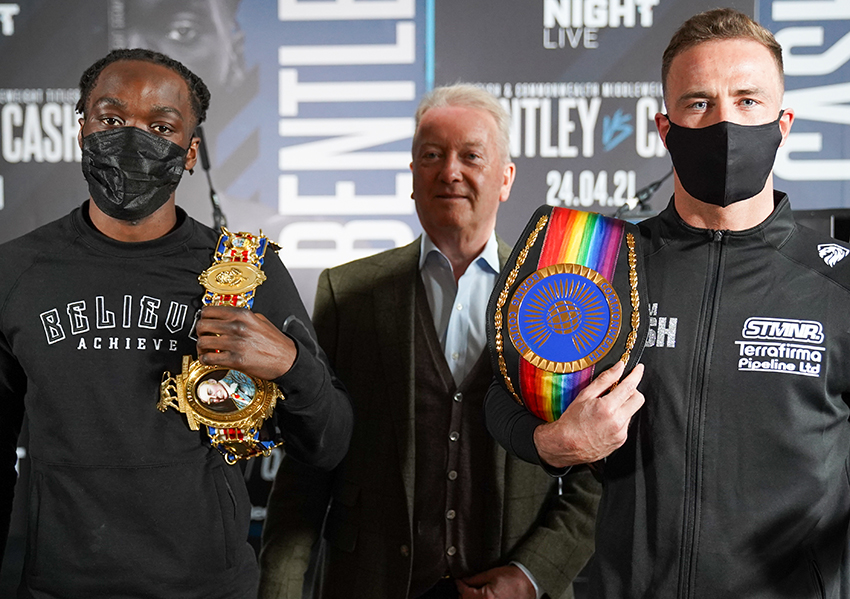 Both titles will be on the line when the bitter rivals meet on Saturday (April 24) live on BT Sport.

Here is a selection of quotes from today’s presser.

This fight came about because the British Boxing Board of Control ordered it. Denzel and Felix didn’t want to withdraw from it. It went out to purse bids which we (Queensberry) won and it’s on.

I don’t think it gets any better than this. Both guys are undefeated, they have similar records and I think you are going to see something a little bit special. I understand there is no love lost from sparring, and was there unofficial sparring out of the ring?

This has got the hallmarks of a classic fight in a division that Britain has always flown the flag in. You can go back over the years and look at some of the great British and Commonwealth Middleweight title fights. This, definitely has a great chance of being up there as far as quality and action are concerned. As a boxing fan I’m looking forward to it.

There was a lot of talk, that Tony Sims (Felix’s trainer) said he was considering not taking the fight and moving on, but hats off to them.

We won the purse bids and they are having the fight. From the fans point of view it doesn’t get any better than this. The one who has the skills and wants it the most will come through.

I have an opinion about the fight and that is why we got behind Denzel in the purse bids. We believe in him. If Denzel comes through this as we expect him to then he will move on and into a position where he gets a world title fight.

Denzel hasn’t come through the easy way. It has been tough. I lost a main event on a televised dinner show on the day.

Denzel had been sparring ten rounds, but he jumped at a fight that night and stopped Serge Ambomo. That tells me a lot about him. It shows me a guy who believes in himself. He has looked better and better. He is a credit to himself and his trainer Martin Bowers.

If good guys win he comes through this weekend. Fans are going to see something special between two talented fighters. There is competition between them, their promoters. The whole thing smacks of electricity. It will be exciting while it lasts.

DENZEL BENTLEYI am very proud to be British Middleweight champion. I have been everywhere with the belt. I’ve shown it off to let everyone know about my achievements. I am proud. I think Felix will regret taking this fight.

Felix believes he is world level, but go through his opponents and there is nothing to suggest he is at that level, but every fighter needs to believe they are. I believe I am world level and he believes I’m not, so we will see.

There is the sparring story with Felix. We both did four rounds sparring then jumped back in with each other. We were going at it and he started hitting low and behind the head – all the little dirty tricks he likes to do. Then it got heated, he got upset and it turned into a little scrap but it’s in the past. He says I was clinging on for dear life – well we will see on Saturday.

I do everything better than Felix. Is he gonna turn up with his dirty tricks? He is a dirty fighter. Everyone has seen it in his fights before. He does it well and gets away with it a lot, but it’s not going to bother me. I reckon I am going to stop him even if he doesn’t have chinks in his armour.

Every British fighter wants to win the British title and that is what I want to do. Denzel is in my way so let’s get it on. I cannot wait to get my hands on the British belt.

There were other options on the table, but we sat down and spoke as a team. We had a look at Denzel and just said, ‘Let’s go for it.’

I would have preferred it was on a Matchroom show, but it doesn’t make any difference to me, a ring is a ring and the best man will win on the night. I believe I am world level and I don’t believe that Denzel is.

He is a decent domestic fighter. I believe I am a level above him and I will show him on Saturday night. Styles make fights. I believe I am better and I will prove that. We will sort it out man to man and the best man will win. I believe that man is going to be me.

He has been doing a world tour with that belt. I hope he has enjoyed it because it is leaving him on Saturday night.

I am going to be in front of him and he will have to deal with it. Am I a dirty fighter? I am what I am. I am a very good fighter and I am going to show Denzel. I will win the fight by stoppage. Let’s just put on a good fight for the fans.